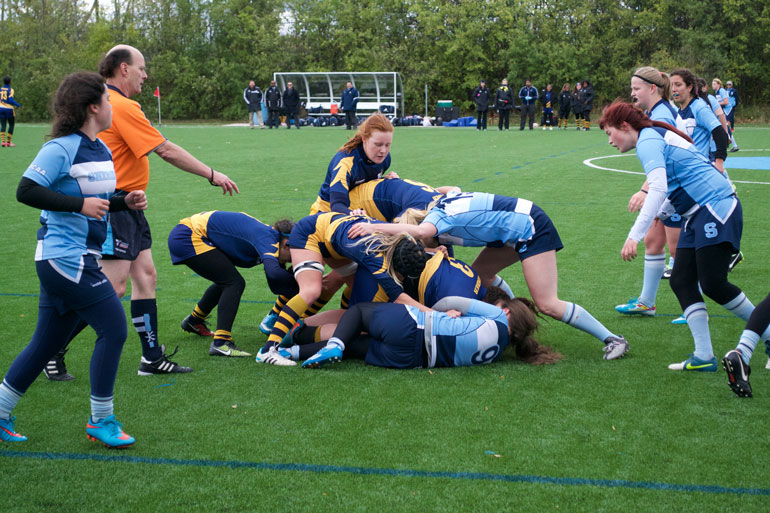 Humber Hawks in Action on Oct. 18 against the Seneca Sting

The Hawk’s home turf, Valley Field, has been closed for the season by City of Toronto’s Parks, Forestry and Recreation department, which operates the field.

A game between the Humber Hawks and Seneca Sting was scheduled to take place at home field last Saturday, but Humber News reporters hoping to cover it found that no game was being played.

The match was relocated to the Brampton Rugby Club because of the City of Toronto move which did not permit the Hawks to play, Andrew Leopold, Director of Communications at Humber College, said in an email to Humber News on Thursday.

“Saturday, we couldn’t get the field lined, so we were unable to play here,” said Chateau.

The change of location did not shake the Hawks, though. The team beat the Sting 66-0.

With the field closed, the Hawks now have had to change their routine.

“We end up in this situation most years,” said Chateau. “Last few years we’ve been lucky enough to get our playoff game on the field, but they keep pulling the timing back.”

The Brampton Rugby Club is located at 7065 Kennedy Rd. S., near the Powerade Centre off of Hurontario Street in Brampton.

Humber athletics is looking into organizing a bus that will take fans from the North Campus to the Brampton Rugby Club to watch the upcoming playoff games.

Humber hosts the semifinal game on Nov. 7 at noon, the game will be played in Brampton.

The championship matches are slated for Nov. 15, if the Hawks host any of the medal games, they will also be played in Brampton.