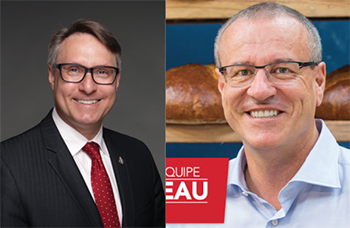 By Alex Martino and Sarah Trumbley

Liberal Candidate Borys Wrzesnewskyj has won the riding of Etobicoke Centre with 52.5% of the vote, compared to 37.3% for Conservatives Ted Opitz, with 192 of 233 polls reporting. Conservative Tanya De Mello finished third with 8.2% of the vote.

Wrzesnewskyj said he’s excited to be returning to Parliament, because there are a number of bills he wants to bring back including amendments to the hate crime act.

Residents of the Etobicoke Centre riding were chanting Wrzesnewskyj and praising his good attitude and hard work for returning to Parliament Hill.

There were hotly contested races across the GTA this federal election and Etobicoke Centre was one of the hottest.

The Toronto suburb gained national attention in the 2011 election when a vote recount went all the way to the Supreme Court of Canada.

Until that election, the Liberals had held the riding for 18-years, winning elections with comfortable leads.

Prominent Liberal Allan Rock represented the riding until 2004 when he packed his bags after former Prime Minister Jean Chretien stepped down.

The 2011 election brought in Ted Opitz, a telecom engineer turned businessman with military experience, who served in Bosnia as part of NATO forces.

Running for the first time in this election was NDP candidate Tanya De Mello, the Equity and Diversity Officer at the University of Toronto Scarborough campus.

Her resume is filled with community building, peace efforts with the United Nations and experience fighting for labour rights.

The key to winning the riding depended in large part on the ability to reach the Eastern European community.

Both Wrzesnewskyj, a Ukrainian-Canadian, and Opitz, a Polish-Canadian, campaign specifically on issues relating to both communities.

Much of their work in public service has been focused on Canada’s relations with Poland and Ukraine.

De Mello has also done her part to get out the Ukrainian-Canadian vote, publicizing her endorsement by singer Rosava on her campaign website.

This election, Wrzesnewskyj was looking for redemption. As a community fixture in Etobicoke, the former MP was looking to use his grassroots connection to the area to return to Parliament Hill.