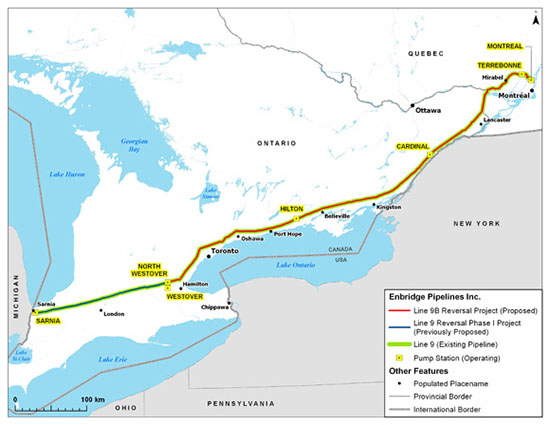 A map of Enbridge’s Line 9 pipeline. (Photo courtesy of the National Energy Board)

The approval this week of Enbridge’s Line 9 pipeline from Sarnia, Ont., to Montreal prompted a range of reaction on Thursday.

The pipeline was approved on Wednesday by the National Energy Board (NEB) to start shipping oil west.

“We are pleased the National Energy Board confirmed that our three hydrostatic tests met their criteria and were successful,” the company said in an email statement to Humber News.

The pipeline will run through Toronto from central Etobicoke heading north-east into Scarborough.

Although the matter falls under federal jurisdiction, Toronto city councillor Stephen Holyday said the city needs to ensure the city has no choice but to accept the new pipeline.

“What we need to do is cope with changes in infrastructure,” Holyday told Humber News.

Holyday described an event in Etobicoke this summer when a small truck carrying transformer oil overturned and had a large effect on local wildlife. The volume was much smaller than a potential pipeline rupture, however he is confident that Toronto’s emergency services and Enbridge have plans to deal with that type of situation, he said.

“The product evaporates into the air and can make people sick as we saw in the Kalamazoo spill in Michigan,” Goldberg said.

“People experienced nausea, headaches and respiratory problems up to 50 kilometres away from the spill,” she said.

She added that the Michigan pipeline also belonged to Enbridge and that it is very similar in age and structure to Line 9.

“For us, no amount of tests or work on the pipeline will make it safe as it provides an additional export route for tar sands and therefore promotes the expansion of the tar sands mega project,” Goldberg said.

Line 9 has been transporting oil westward for 17 years, although it was built in 1976 to transport oil eastward. Enbridge plans to reverse the pipeline once again because this year’s drop in Alberta oil prices.

There are still technical preparations to be done and there is no specific date on when the pipeline will return to service, said the statement.

The proposal has been slowed down by environmental concerns such as the protection of waterways.