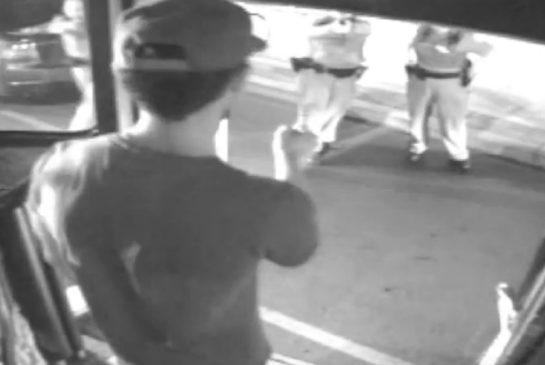 The jury in the James Forcillo murder trial was presented with more details on Thursday from the 3D analyst who created the computer model of the 2013 streetcar shooting that killed 18-year old Sammy Yatim.

Eugene Liscio took the witness stand again, this time to determine the accuracy of the digital images

Lawrence Gridin, a defence lawyer for Toronto police Const. James Forcillo, asked Liscio a series of questions and eventually establish an agreed upon distance of about 10 feet between the tip of Yatim’s knife to the tip of Forcillo’s gun.

Gridin asked Liscio based on his forensics background if he could determine whether or not Yatim exhibited any movement that would suggest a forward lunge in the direction of the officers.

“Based on the video and picture evidence Yatim seemed to be in an upright and erect position, which doesn’t suggest a forward lean,” Liscio testified.

Gridin brought the jury’s attention to the video evidence of TTC driver Chad Seymour fleeing the streetcar from the front entrance to the street corner.

“How long did it take for Mr. Seymour to get from the front entrance to the curb,” Gridin asked.

The defence also highlighted that Seymour is older, heavier and not as agile as the 18-year-old Yatim.

Gridin said even though there was roughly 10 feet separating Yatim from the officers, it was suggested that Yatim could have easily closed that gap in less then 1.4 seconds.

The implication was that Officer Forcillo had to make a snap judgment call to pull the trigger.

Federico is in charge of all Toronto police divisions and oversees internal conduct investigations.

He is also a member of the Ontario use of force committee.

Under questioning by the crown attorney, Federico testified that Const. Forcillo had undergone use-of-force training, including “stress inoculation,” three months before the Yatim shooting.

Ultimately, however, Federico would not testify against Forcillo’s actions on the night in question due to his positional code of ethics.

The trial resumes Friday at the 361 University Avenue courthouse.