All eyes on Mulcair in second French-language debate 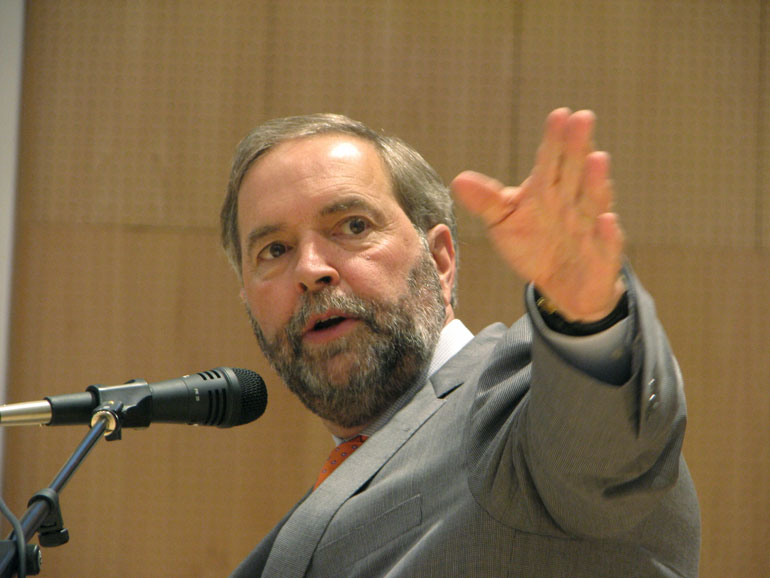 Mulcair has to hold onto his support in Quebec if he has any hope of forming government. (Photo By Katie Pedersen)

With support for the NDP declining in Quebec, all eyes are on Thomas Mulcair tonight as he attempts to hold on to seats that his party gained in the 2011 election.

The debate in Montreal this evening, hosted by the Quebecor owned TVA network, will be conducted exclusively in French. It may be the last chance parties have to sway voters in the province.

Support for the NDP is in steady decline in Quebec, a poll published Oct 1 by Nanos Research found that support in the province has been in decline since mid September.

“I think the NDP erred by taking on two debates in Quebec,” said Nelson Wiseman, Professor of Political Science and Director of the Canadian Studies program at the University of Toronto.

Leading in Quebec opened the NDP up to attack from both sides, said Wiseman.  The party had nowhere to go but down, he said.

Harper will not attend the media consortium debate later this month

Size of viewing audience may be the reason why Harper elected to not attend the media consortium debate.  He may have wanted to limit the audience of the debates, said Wiseman.

Quebec isn’t the only place where NDP support is slipping, polls suggest that support for the orange wave might be in decline across the nation.

A Forum Research poll published on Oct 1 2015 found that the Liberals and Conservatives are in a dead heat with each other while Mulcair’s NDP drag behind at 25 per cent. The poll surveyed just under 1500 Canadians between Sept 28 and 29 and is accurate to 3 percentage points, 19 times out of 20.

The three leaders all have opposing views on the wearing of the niqab during citizenship ceremonies. (Photo courtesy of Reuters)

The debate surrounding the niqab has been center stage in recent weeks.

A poll by Forum Research Inc. published  found that 61 per cent of voters in Quebec opposed allowing the niqab to be worn during citizenship ceremonies.

Mulcair’s stance on the niqab during citizenship ceremonies does not resonate well with Quebec voters. Tonight he will have to defend his stance to an audience that on a whole, disagrees with him.

Gilles Duceppe will be present tonight. In past debates he has argued hard against the niqab. (Photo from Flickr Creative Commons)

For only the second time this campaign, Gilles Duceppe, leader of the Bloc Quebecois, has been invited to participate in tonight’s debate.

“Just the fact that he’s there gives him a higher profile,” Wiseman said. Just by being there it lets people see Duceppe as a more acceptable alternative, said Wiseman.

Following the last French-language debate, the Bloc experienced a boost in the polls, but has been in decline ever since, said Wiseman.

The debate begins at 8 p.m. EST. It can be viewed entirely in French on TVA or with English translation on CPAC.