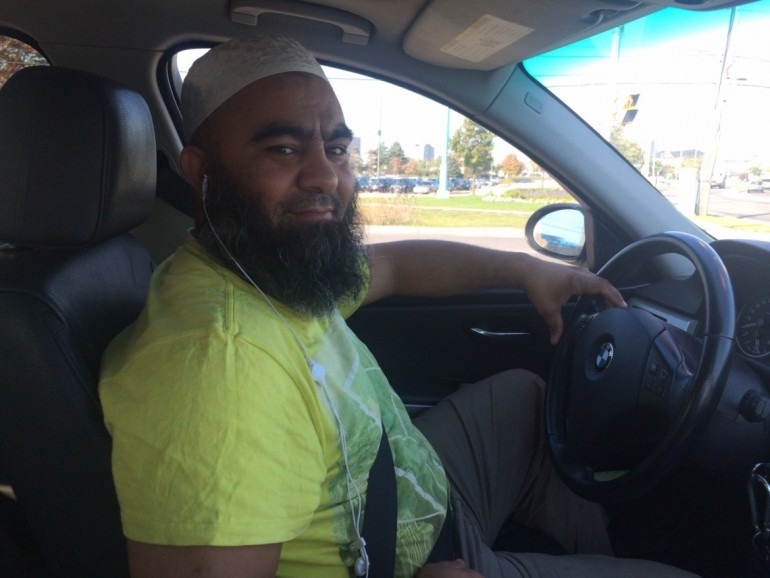 Humber News took a test ride in both an Uber car and a traditional taxi on Tuesday to get two perspectives on ridesharing in Toronto.

Shah Alakoozi has been working for Uber for four days.

“I love it. The good thing about Uber is that you can sign in and sign out whenever you want. You have more time for yourself and for your family,” he said.

Alakoozi’s family lives in Cornwall, Ont. He is hoping to move them to Toronto and says Uber is a great way for him to make extra money.

“The pay is good. You get to meet new people. You get to drive to different places. It’s a little bit of everything,” he said.

Shah Alakoozi has been working for Uber for four days. (Clare Jenkins)

The best part of being an Uber driver? The freedom, according to Alakoozi. “You’re your own boss,” he said.

However, taxi drivers don’t necessarily have such a positive outlook on the service. One driver, who asked not to be named, said he finds it unfair that taxis are required to follow such strict rules to operate in Toronto while Uber drivers are not.

“In a country like Canada, if someone is taking responsibility for driving a person without any qualifications, where’s the government?” he said.

Drivers have to spend almost $650 in order to apply for a taxicab license. Applicants are also required to provide fingerprints, a criminal background check, proof of work status and complete a CPR course.

To work for Uber, drivers are simply required to own a post-2005 model vehicle, have a clean driving record and pass a background check.

“They are driving without having to spend anything. If they aren’t regulated then we should get it free. Why are we paying?” said the taxi driver.

The taxicab industry wants Toronto to push back at Uber. (Clare Jenkins)

Alakoozi said he hopes Uber will not fully take over the rideshare market. “Competition is good. I don’t want the taxis to go out of business,” he said.

The California-based company launched a petition on Monday urging Toronto riders to contact their city councilor and ask that they “recognize the merits of innovations that are allowing this to happen and support smart ridesharing regulations.”

By Tuesday afternoon the petition already had over 37 thousand signatures.

Uber is calling on Toronto city councilors to pass the reforms recommended by city staff at council’s meeting on Sept. 30.

Uber Canada general manager Ian Black told The Star Tuesday, “The vote on Sept. 30 is really a ‘Yes’ or ‘No’ vote on whether this city wants to embrace Uber.”

He also said he thinks Toronto needs to start looking at the future of transportation.

“They have to realize that this is technology and everyone loves it,” Alakoozi said. “You can’t be going backwards.”