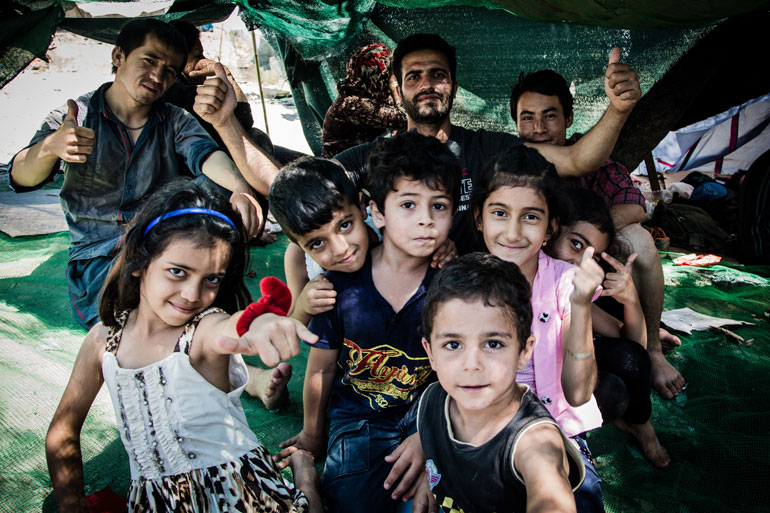 Family and friends sit together in their makeshift shelter on the island of Lesbos, Greece. (Courtesy: Stephen Ryan / IFRC)

by Alex Martino and Katherine Green

Four local universities are partnering with Lifeline Syria, a Toronto-based humanitarian organization, to sponsor and resettle a pledged 1,000 refugees in the Greater Toronto Area.

York University, the University of Toronto and OCAD University have joined Ryerson University’s initiative to bring Syrians hoping for permanent relocation to Canada.

The announcement made on Sept. 15 allows Ryerson’s original goal of resettling 11 families to increase to 25 families or 100 refugees total.

The four universities are working to focus their resources and recruits into 25 sponsorship teams, one for each of the families they aim to relocate.

Each of the teams will be tasked with the goal of raising $27,000 as part of a financial program to support families for approximately one year.

York University and U of T are looking beyond the commitment of resettling families to develop multi-faceted bursary and scholarship programs for these future community members.

Lorne Sossin, dean of Osgoode Hall Law School, has worked closely with York University President and Vice-Chancellor Mamdouh Shoukri to initiate partnership with Ryerson, as well as pursue their own unique contribution.

York’s “goals will include a target of sponsorships of Syrian refugee families on the one hand, and [support] for refugee students whether from Syria or the many other parts of the world in crisis where refugees are fleeing,” said Sossin.

York is to make a formal announcement this week.

Lifeline Syria’s enhancement of Canada’s resettlement plan in the face of international conflict has spurred local government to offer the organization support in its efforts.

Ontario Premier Kathleen Wynne announced Sept. 20 that the provincial government will be contributing to Lifeline Syria in addition to the proposed $10.5 million going to aid refugees.

Ontario is providing $300,000 more to @LifelineSyria to help them continue the incredible & important work they do. pic.twitter.com/jdC43zRx3R — Kathleen Wynne (@Kathleen_Wynne) September 20, 2015

The City of Toronto passed a motion in a Sept. 21 executive meeting to allocate $600,000 to a refugee resettlement program. Meanwhile, Mayor John Tory announced earlier this month that he would be sponsoring a refugee family via Lifeline Syria.

Though limited in scope, efforts by post-secondary institutions are on par with the government’s efforts.

“Post-secondary institutions are embedded in their communities and ought to be builders of those communities,” said Sossin.

“This kind of initiative can break down the barriers between faculty, students, staff and alumni as post-secondary communities come together for shared goals.”