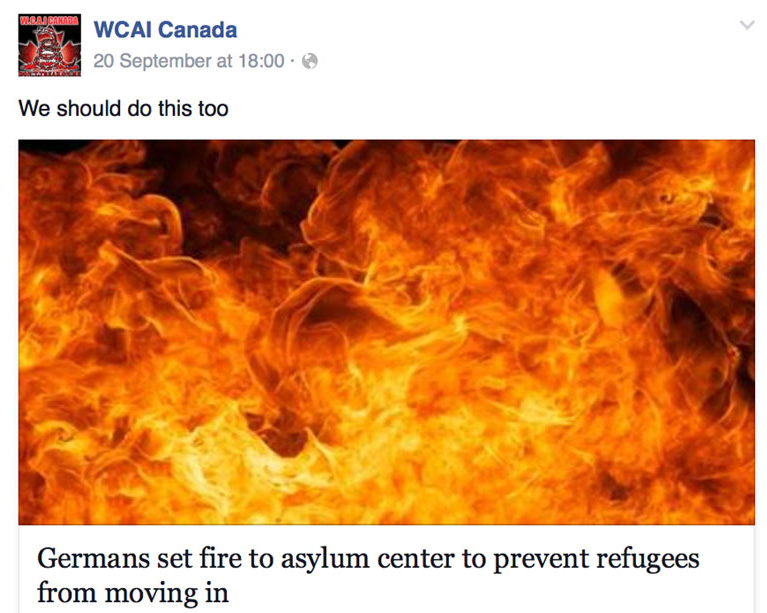 A Canadian anti-Muslim group called the Worldwide Coalition Against Islam is causing controversy on social media for hate speech directed at Syrian refugees.

The WCAI posted an article on Facebook about a group of people in the city of Wertheim, Germany allegedly setting fire to an asylum center for refugees, the post was captioned “we should do this too.”

There is vile Canadian anti-Muslim FB group that is advocating setting fire to asylum centres. This is criminal, no? https://t.co/iYsE24IQ0i

University of Toronto student Walied Khogali, who is also a practicing Muslim, said the WCAI Facebook page is one of the most offensive things he’s ever seen.

“It seems to me this is being used as a tool to get people rallied up against Islam as a faith and against the Liberals because he keeps attacking Justin Trudeau,” Khogali said. “I don’t know this is all just very xenophobic to me.”

“No refugee chooses to be a refugee let’s make that very clear they did not become one out of choice they were forced to be refugees,” Khogali said.

The founder of WCAI, who identified himself only as Joey, told Humber News in a statement he started the group because he was outraged about the ISIS situation.

“I started WCAI because I was appalled by what ISIS was doing, and after doing much research and seeing what is happening in Europe, Australia and what happened to countries that used to be ‘normal’ that are now Islamic dictatorship countries like Lebanon, Iran, Afghanistan and so on, I realized that the problem isn’t just ISIS it’s Islam,” Joey said.

Joey claimed the refugee situation is a ploy for Islam to infiltrate western and European society.

“About the refugee crisis I think it’s just a form of ‘TAQIYA‘ which is the Islamic form of deception for the purpose of spreading Islam,” Joey said.

Executive Director of the National Council of Canadian Muslims Ihsaan Gardee said Canadians have shown they have long accepted multiculturalism and it’s lamentable that a small group of people feel negatively about the Islamic community.

“While it’s unfortunate that a minority of individuals are opposed to Syrian refugees coming to Canada, what we have seen in the past few weeks is a groundswell of support and commitment to resettling refugees to Canada,” Gardee said.

Gardee encouraged people not to respond to hate with hate.

“People who express opposition based on their own prejudices and fears should be engaged with positively and provided with information that would help allay their concerns, including the fact that Muslims have historically been a great addition to Canada’s fabric and mosaic and contribute positively to this nation in all parts of society,” Gardee added.