Jays begin with optimism after opening win in New York 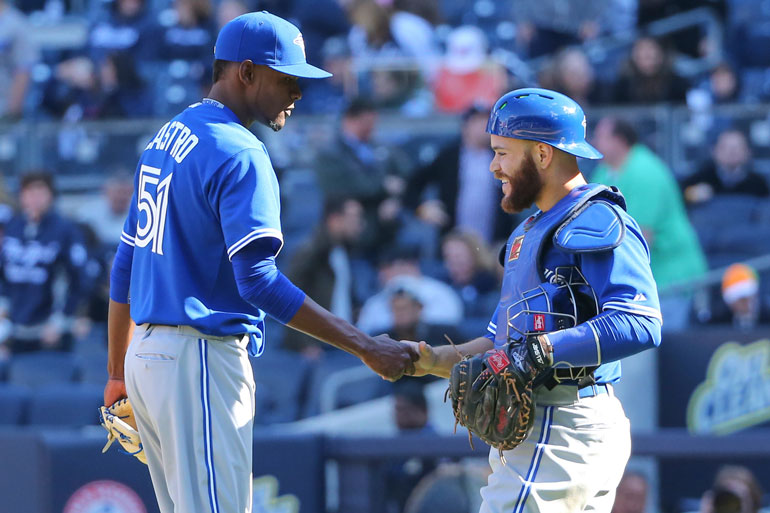 With their season opener win behind them, the Toronto Blue Jays are facing a lot of optimism and some hard questions about what they need to remedy to contend in the AL East.

The Jays kicked off their 39th season on Monday with a victory against the New York Yankees. The Jays went into the Bronx and took it to the Yankee club, 6-1.

Drew Hutchinson pitched six innings for the Jays allowing one run on three hits. Edwin Encarnacion hit a home run and Russell Martin drove in a pair of runs as the Jays beat up opposing pitcher Masahiro Tanaka at Yankee Stadium.

Ken Fidlin, sports writer for the Toronto Sun, says the key for the Jays is to “stay healthy” all year.

“The Jays must stay healthy, so many injuries have derailed them in the past,” he said.

On that note, starting pitcher Marcus Stroman tore his ACL during Spring training earlier this year.

Fidlin also added that the one thing the Jays really do need is depth all over the field.

Ben Nicholson-Smith, Sportsnet baseball editor, told Humber News that the Jays have the talent to make a push, but they need “those guys [starters] to perform to their full abilities,” and they will also need a bit of luck on their side.

“They have the pieces in place to get there,” he added.

Nicholson-Smith said, there is no elite team in the AL East, so this is a great time and a great opportunity  for the Jays to take advantage of this and make the playoffs. He added that the Jays will need to reach the 92 win mark to win the division in the 162 game season.

He said, the division is open and any team can take it, “there won’t be a 100 game winner this year.”

Brendan Kennedy beat writer for the Jays said that Monday was a great start to the year so “you can’t be disappointed with the all around win.”

Kennedy said the pitching was great and a key part of the win, but he was more impressed with the batting of the players.

“It’s encouraging to see the bottom of the order being aggressive, but selective,” said Kennedy.

Players like Devon Travis and Kevin Pillar really stepped up, he said. They will have to step up when the top of the order don’t have good games, said Kennedy.

The Jays will square off against the Yankees on Wednesday and Thursday before heading to Baltimore to play the Orioles for three games. The Blue Jays play the Tampa Bay Rays on April 13 for their home opener.