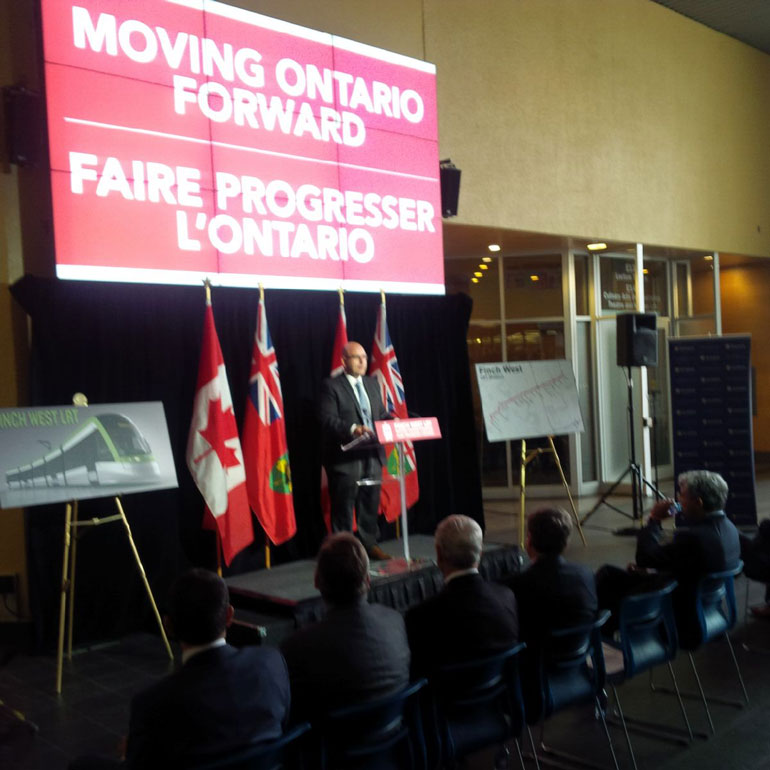 The province is moving ahead with the $1.2 billion Finch West Light Rail Transit (LRT) project, which will link Humber College’s north campus to the new Toronto-York Spadina subway extension.

According to the province, 11 new kilometres of rapid transit will be built along Finch Avenue West. It will begin at the new Finch West subway station near York University, and end at Humber North.

The route will terminate at Humber by running from Finch to Highway 27, and then turn right at Humber College Boulevard and come into campus.

“This project is shovel-ready,” said Ontario Transportation Minister Steven Del Duca at the announcement, which was held at the Humber campus. “It’s a happy day for Toronto.”

The Finch West LRT will link people to opportunity and opportunity to people, said Toronto Mayor John Tory, who joined Del Duca at the announcement.

Mary Anne Aikins, Manager of Media Relations & Issues with Metrolinx, told Humber News the project will be built and maintained by Metrolinx, but operated by the TTC.

Tory also stressed that the project would not eliminate any of the current lanes of traffic on Finch Avenue.

Construction is targeted to begin in spring 2016, and is expected to be complete by 2021.

The line will have 18 surface stops along its route, and will provider connections to Mississauga and Brampton transit at Humber.

The government is estimating ridership at 2,250 passengers per hour by 2031.

Humber News spoke to Del Duca, Tory and Humber president Chris Whitaker about the project, as well as gauging the opinions of students.

The Finch West LRT was originally proposed as part of former mayor David Miller’s Transit City project in 2007. In April 2009, the provincial government announced it was “moving forward” with a rapid transit line along Finch from the Yonge subway to Humber, as part of three major transit projects in Toronto.

“It’s the most ambitious project of kind in Canadian history,”Premier Dalton McGuinty said at the time. “It’s big, bold and I’m proud to say that today, in earnest, we are getting started.”

At the time, the Finch LRT was scheduled to start construction in 2010 and be finished by 2013.

Transit City was declared “dead” by Rob Ford when he was elected mayor in 2010, but several LRT lines, including Finch West, were revived by Toronto council in 2012.

The project is part of the Ontario government’s $8.4 billion funding commitment to Toronto transit. In addition, the government announced that it would be providing $130 billion over 10 years for public infrastructure in the most recent provincial budget.