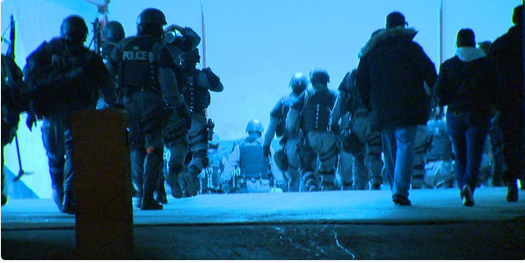 Police tactical units poured out of rental trucks as they approached their raid locations in North York. #Toronto pic.twitter.com/UtViRhnOXu

BREAKING: About 100 GTA police officers involved in early AM raids. This is near Jane/Wilson. Arrests made. #Toronto pic.twitter.com/yt1xmmMReR

Several reports said people were seen being taken into custody during the raid, but police haven’t provided a statement about how many people or what chargers are being laid.

The sex crimes unit handling the investigation was supposed to update media on the arrests at 10 a.m. news conference, but later tweeted it was postponed indefinitely due to further investigation needed.

They later tweeted that the events of this morning were not related to the recent RCMP Canada-wide prostitution ring investigation.