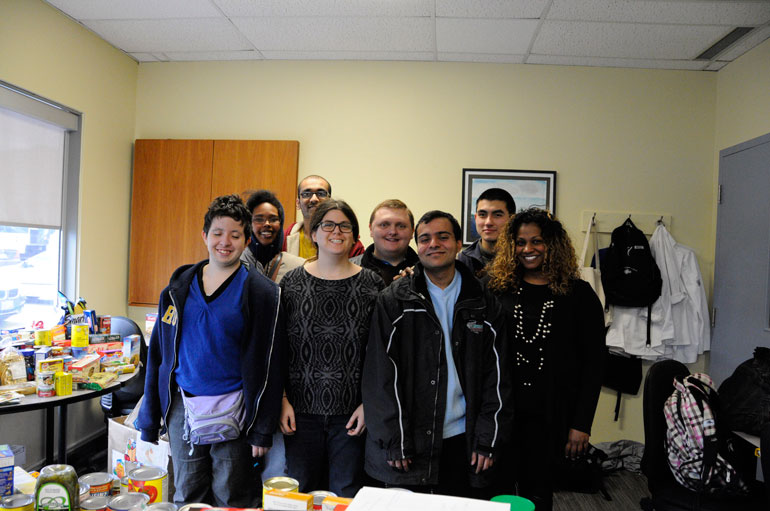 The Community Integration through Co-operative Education program (CICE) wrapped up a food donation drive on Thursday afternoon. Although there was not as much food donated as last year, organizers said they were pleased with the efforts.

“Last year we had a huge amount of food,” said 22-year-old Amal Omar. “It took a lot of effort, but this year [we didn’t get] as much. Not a lot of people on campus got a chance to donate.”

Students in the CICE program student council, who have developmental and intellectual disabilities, collected boxes filled with donated foods, and brought it into their tutorial room for sorting.

This is the second year the CICE program has been doing their food drives.

The donated food is usually sent to the HSF food bank and Ernestine’s Women’s Shelter, a local shelter for mothers and children.

Melanie Savoia, the CICE Integration Facilitator said she and the students love doing this important task.

“The CICE student council is completely run by the students, they decide on the activities and events that they want to do,” she said.

“Then they have staff like myself and two other staff who support them planning the ideas. So they wanted to do a food drive in time for this long weekend and wanted to give back to the college community and help the community at large.”

The campaign has not been as successful as last year but students are already looking forward.

“Next year, we’re hoping to try to do two within the year,” said Savoia.

Omar said it was a life-changing experience.

“It has [been a good experience], because if it wasn’t for us, the student council wouldn’t have been the same.  I think it’s awesome, there will be more opportunities. We did a lot as a student council,” she said.

CICE student Hassaan Shoaib, 22, said some of his friends can’t really afford to go out.

“When we go out, I usually pay for their food or help them get food,” he said.

“I’ve been contributing in giving back for a long time now.”