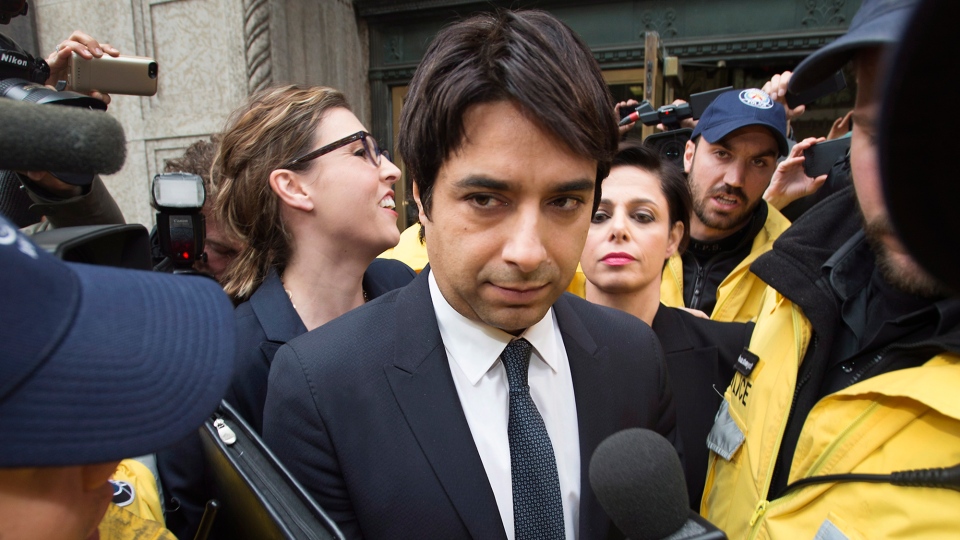 Jian Ghomeshi is escorted by police out of court past members of the media in Toronto on Wednesday, November 26, 2014 (REUTERS)

CBC executives were left disappointed and embarrassed by the findings of a report released Thursday from an independent investigator hired to examine CBC’s handling of the allegations against former radio host Jian Ghomeshi.

“We receive this report with humility and in the constructive spirits in which it was intended. The findings of this report are troubling. They are disappointing. They point to lapses in our systems, and concerns about our culture,” CBC President Hubert Lacroix said.

Following the release of the report, CBC executives spoke with reporters via conference call to discuss the overall findings, which included a breakdown and recommendations.

“We have work to do to reinforce our timeless values and to create a strong, safe and respectable workplace” – Lacroix

Toronto employment lawyer Janice Rubin was hired by the CBC last November to look into the allegations of inappropriate workplace behavior that related to Ghomeshi.

Rubin spoke with 99 people over five months while conducting the report, 17 people declined to be interviewed, including Ghomeshi.

In the report the majority of witnesses  described “a pattern of behaviour and conduct” that fell below the CBC’s standards and said they were “deeply disrespectful to employees.” Some behaviours described included yelling, belittling and humiliating others, playing pranks and cruel jokes, and in a “small number of cases,” sexually harassing colleagues.

A number of colleagues also reported receiving back and shoulder massages from Ghomeshi, the report said. “Most of the witnesses did not find these massages sexual (although several did) but instead described them as creepy and disrespectful of their personal boundaries.”

The report also contains allegations that Ghomeshi made colleagues uncomfortable by speaking about his sex life in the workplace.

“There were incidents where Mr. Ghomeshi shared information that witnesses found too personal, too graphic and generally unsavoury,” the report said.

“We’re confident we can, and will, do better” – Conway

During Thursday’s conference call, Lacroix and Heather Conway, executive vice-president of English Services, offered an apology to employees and to Canadians in general.

“On behalf of this organization, I offer a sincere and unqualified apology to our employees and to Canadians who have a right to expect a higher standard from their public broadcaster,” said Lacroix.

He said the situation has been complicated and difficult, and that much work needs to be done in order to rebuild the trust of CBC employees.

“We have work to do to reinforce our timeless values and to create a strong, safe and respectable workplace. We owe this to our people. We owe it to  the people of Canada whom we serve. I am confident we can do exactly that,” Lacroix said in the conference call.

The inappropriate behaviors that took place, and the standards of behavior that were not met, are completely contrary to CBC’s mission and mandate, said Conway.

“Where we experienced or tolerated an unsafe or non-respectful workplace, we see that as a failure. We’re confident we can, and will, do better. That’s why we commissioned the Rubin report,” she said.

Moving forward, Rubin and her team made nine recommendations for the CBC.

“CBC is in general agreement with all of the provided recommendations and we have already had some preliminary discussions with the [Canadian Media Guild], our union, which I see as very positive and constructive,” Lacroix said.

Lacroix said some recommendations can be implemented quickly, while others may require more effort.

Nine recommendations were made for the CBC

Stacey R. Ball, a Toronto employment lawyer specializing in wrongful dismissal, said he believes that the steps to eliminating sexual harassment in the workplace come from education and training.

“Employers can have occasional seminars on the Human Rights Code and Bill 168 once every year, so there is continued education,” said Ball.

He said it’s important that older employees are advised that societal norms have changed and that employers have an obligation to prevent sexual harassment, sexual assault and violence in the workplace.

“Older employees might not be aware that norms have changed and they cannot act how they could act 15 to 20 years ago. Educating older employees is very important.”

The CBC fired Ghomeshi, 47, on Oct. 26, 2014 after viewing what it called “graphic evidence” that he caused physical injury to a woman.

He is also under criminal investigation after several women complained to Toronto police he had physically or sexually assaulted them.

He faces seven counts of sexual assault and one of overcoming resistance by choking, but his lawyer has said he will plead not guilty to all charges.

Ghomeshi is free on $100,000 bail with numerous conditions. He is due to return to court April 28.

Boyce and Spencer conducted interviews with “Q” employees last summer as part of an internal investigation.

The two were put on indefinite leave in January.

When asked about these firings during the conference call, Conway said CBC would not discuss any details of their departure.

“I don’t hold people to a standard of perfection. But I do think that anyone in a senior role has a significant accountability and can be held to account for the responsibilities that come with a position like that,” said Conway.

DISCLAIMER: Todd Spencer is a member of the Advisory Board of the Humber College Journalism Program.