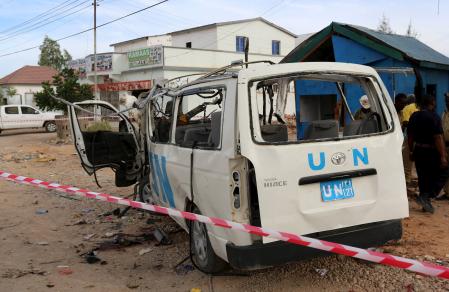 A U.N van is seen damaged by an explosive device outside the U.N. compound in Garowe. (Reuters)

A bomb attack on a van carrying workers to the United Nation’s compound in Garowe has killed at least nine people on Monday.

Somali militant group, al Shabaab, claimed responsibility for the bombing according to The Guardian.

Of the nine people confirmed dead, four people were from the global body’s children fund of UNICEF, reported by the newspaper.

Updates and reaction to the attack are detailed below.