Why young athletes are walking away from millions 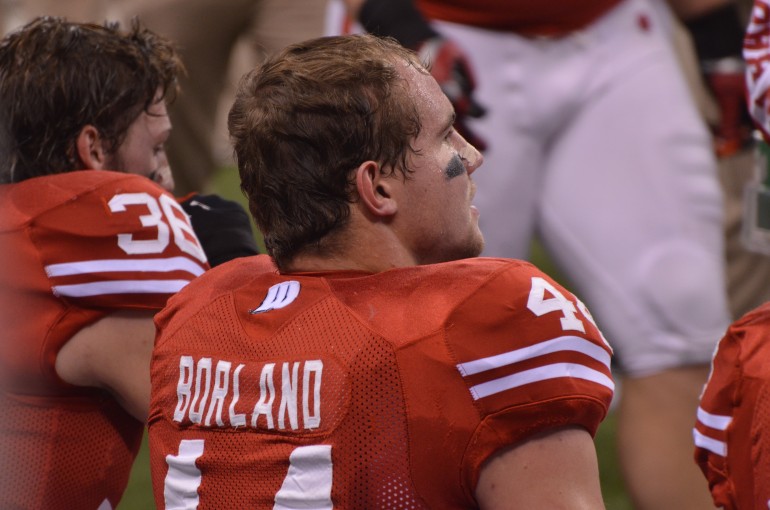 Chris Borland, 24, has retired from the NFL as a member of the San Francisco 49ers after just one season. (WIKIMEDIA COMMONS)

Over the past few weeks, numerous young, healthy men walked away from a lavish life of million-dollar salaries and international recognition.

They are professional football players who have prioritized their futures ahead of their passion.

The football players, who are all in their twenties, are citing various reasons for walking away from professional football.

With that being said, after much thought & consideration I have chosen to step away from football as I have opted to pursue other interests.

All good things come to an end!!! pic.twitter.com/zl6EJQ5SAE

Borland, a 24-year-old linebacker of the San Francisco 49ers, played just one season in the NFL.

Although he went uninjured his entire professional career, Borland said in his retirement statement that he made the decision to prevent himself from getting hurt in the future.

At first glance, the retirements and turned-down lucrative contracts may seem mind-boggling to some. But others argue these young athletes have made the most important decision of their adult lives.

“A lot of athletes realize in school that after college they’re not going to play professionally,” said Dean Wylie, coach of the Humber women’s volleyball team and facility manager of Humber Athletics.

“Many student athletes have that kind of self recognition after playing a few years at a higher level. But there are other people that flirt with that fine line between pro and semi-pro. Those are the people that have never considered any other lifestyle and sometimes that can catch up with them later in life,” he said.

Patrick Willis, the ex pro-bowl linebacker for the San Francisco 49ers who played eight seasons in the NFL, said he feared continuing to play because of the long-term risks associated with taking too many hits.

“Honestly, I pay attention to guys when they’re finished playing, walking around and they’ve got no hips or they can’t play with their kids or they can’t play a pickup basketball game or they can barely walk or their fingers are all like this and people see that and feel sorry then, but nobody knows it’s because you played those few extra years,” said Willis in his retirement press conference.

Locker, Worilds and Jones-Drew, like Borland, said they had reasons for retiring that aren’t health related.

Locker, a quarterback who previously played for the Tennessee Titans, said he retired because he lacks the drive and desire he once had to play the sport.

“Football has always played a pivotal role in my life and I love the game, but I no longer have the burning desire necessary to play the game for a living,” said Locker in a press statement.

“To continue to do so would be unfair to the next organization with whom I would eventually sign. I realize this decision is surprising to many, but I know in my heart that it is the right decision and I look forward to spending more time with my family and pursuing other interests,” he said.

Many of the big-name NFL retirees are calling it quits even though they’ve stated they are healthy enough to continue playing.

Reasons not to play professionally are popping up all over the sports industry. Players seemingly have more concern for their well-being and mental psyche than they have for their salaries.

“A lot of athletes realize in school that after college they’re not going to play professionally. Many student athletes have that kind of self recognition after playing a few years at a higher level. But there are other people that flirt with that fine line between pro and semi-pro. Those are the people that have never considered any other lifestyle and sometimes that can catch up with them later in life.” – Dean Wylie.

Wylie said the physical and mental health risks associated with professional sports are also a hot topic among Canadian colleges and universities.

“I think it’s driven across all sports and it trickles down,” said Wylie, who’s been coaching varsity sports at Ontario colleges since 1998.

“The university therapists and health boards pick up on the trends in professional sports and create protocols.”

Steps are being taken at Humber to reduce the health risks in sports, said Wylie.

He said every varsity coach at Humber, but not every other Ontario college, has undergone mental health training. Humber’s athletic therapists have also been trained to follow a concussion protocol.

“Our protocols have gone through the roof,” said Wylie.

”Humber has it’s own mandate. If there’s a shot to the head, there’s now a concussion protocol for it. There are tests for every type of injury and everything gets documented. It’s being managed now more so than it was 20 years ago,” he said.

Chronic Traumatic Encephalopathy (CTE), according to Boston University’s Alzheimer’s Disease Centre, is one of the most common risks associated with contact sports.

“CTE is a progressive degenerative disease of the brain found in athletes (and others) with a history of repetitive brain trauma, including symptomatic concussions as well as asymptomatic subconcussive hits to the head,” according to Boston University’s website.

The concern for health risks associated with sports is growing. The Coaching Association of Canada and the Canadian Centre for Ethics in Sport, among others, have created the “Active and Safe Program”.

The Active and Safe Program aims to reduce the incidence and severity of concussions caused by sport and stresses the importance of creating safer sporting conditions.

Got a kid who plays sports? Here’s what you need to know about concussions. #ChrisBorland #BrainInjuryAwareness http://t.co/m4zvADdSo3

But hits to the head aren’t the only bone to pick. The average salary for professional athletes has greatly increased in the past 10 years, but so has the list of responsibilities for layers under contract.

Transitioning from an amateur to professional athlete now has more strings attached than in the past, according to the Sport Information Resource Centre (SIRC).

“Old ideas about amateur sport (where participation is a noble leisure activity untainted by payment) have been replaced by systems of sponsorship and endorsement, similar to but separate from the economic models seen in professional sports,” according to an SIRC report on trends and issues in Canadian sports.

The SIRC said the issue lies with the changing atmosphere and demand for professional athletes.

“One result of these discrepancies is that “sport” is often criticized without differentiation, and another is that the more heavily promoted professional sport athlete may in fact be the more questionable role model.”

With such large salaries and contractual ends to meet, mounting pressure to perform is a growing problem for many athletes.

“There is also a pressure for high-performance sport to become more entertaining or spectator-friendly to compete with the influences of professional sport,” said the report.

For professional athletes, the reasons to retire prematurely are piling up. Regardless of salary and success, there seems to be a bigger ball in play that’s making superstars seek relief.

“One result of these discrepancies is that “sport” is often criticized without differentiation, and another is that the more heavily promoted professional sport athlete may in fact be the more questionable role model.” – SIRC.