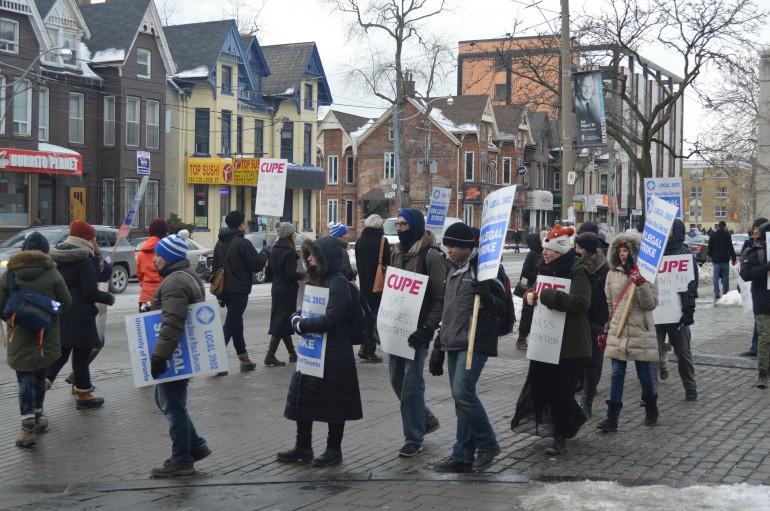 Protestors at the University of Toronto gather to support the change from the union. (COMFORT OBENG/ Humber News)

The teaching assistant strike at the University of Toronto continues with over 1,100 members voting to reject the newest tentative settlement, and 992 voting to ratify.

“All we’re asking is to be able to live in something better than abject poverty,” chief steward of Canadian Union of Public Employees (CUPE) 3902, Lok-Kin Yeung, told Humber News.

Instead of illustrating an exact figure promised to each union member, “they offered us a pot of money that we’d have to administrate ourselves,” said CUPE 3902 spokesperson, Craig Smith. The agreement was turned down as a result.

“We are looking for a modicum of financial security for our members,” he said.

In an open letter to the president of the university,the geography and planning committee said the “teaching assistants and contract instructors at the University of Toronto are striking for something very basic: a liveable income.”

Smith says that the undergraduate support has been “amazing” despite the ongoing strike.

“I think it’s disgusting that the university has enormous profits and many of the administrators get substantive yearly raises and then tell the TA’s they don’t have enough money to pay them a fair wage,” graduate student at U of T, Kandace Ryckman, told Humber News.

The strike has been an annoying process but it’s also been a learning experience, Ryckman said.

“The strike has been good at shedding some light on the structural problems within the university and the impact that running a university like a corporation, rather than a public institution of education has on the staff, students and overall quality of education,” she said.

According to a statement on the University of Toronto’s website, CUPE 3902 turned down wage increases of 3.75%, a comprehensive health care plan, and a bursary fund of over $1 million per year.

“We continue to be in close contact with the Provincial Mediator and remain committed to finding a solution to this impasse that would end the strike and allow affected students to complete their academic term without further disruption,” said Professor Angela Hildyard, VP Human Resources and Equity.

Smith said that one of the reasons that they have been striking for as long as they have is because the university didn’t come to the table until two weeks in.

Union members have been on strike since Feb. 27.