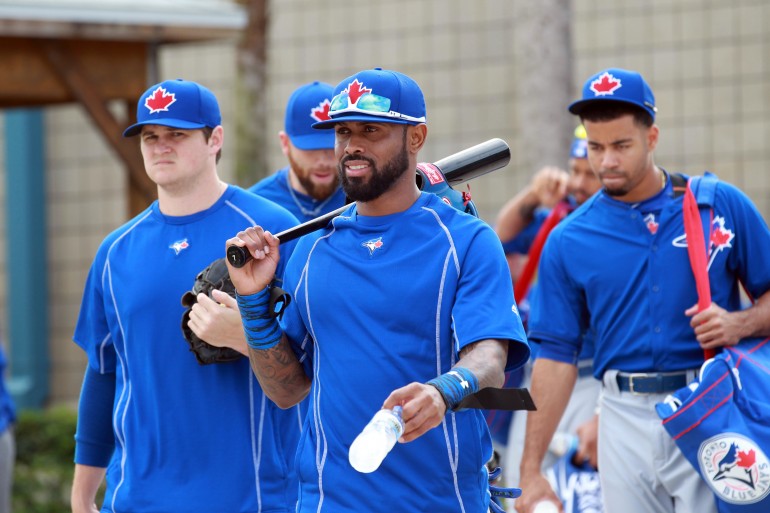 Jose Reyes and the Toronto Blue Jays take the field for warmups at spring training in Dunedin, Fla. (REUTERS)

Ahh. Spring is finally in the air.

The Toronto Blue Jays are in Dunedin, Fla., again for this year’s spring training stint in the Grapefruit League.

Toronto’s start-studded lineup includes many familiar names expected to hold onto their starting spots, but the addition of key free agents from the off-season is already causing controversy over who will start at what position.

Adam Goldman, the editor of AGSportsworld, a site that writes MLB insider stories, said he expects big things from the Blue Jays this season.

“The Jays should make the playoffs, but I see them being a wild card,” said Goldman.

”Toronto should be able to get past Baltimore, but I see the Red Sox winning the division. Boston is looking really strong. Toronto still should be good enough to sneak into the playoffs though.”

Goldman said Dickey, Buehrle and Stroman should all retain their starting pitching spots under John Gibbons’ management, respectively. He said he expects the fourth slot to be given to Drew Hutchison, following last year’s consistency, but the fifth slot still remains a mystery.

“The last starting pitcher spot could easily go to someone who no one expected,” said Goldman. “Daniel Norris is clearly the frontrunner, but he’s inexperienced. Aaron Sanchez could also earn the spot. It could come down to who plays the best during spring training.”

According to the Toronto Blue Jays website, there are currently seven starting pitchers listed on the roster. That number needs to be down to five by the start of the regular season. Left-handed Norris and veteran starting pitcher Johan Santana, formerly of the Minnesota Twins, are two new names trying to break into the Jays’ starting rotation.

“Norris is probably the frontrunner to get the job,” said Birenbaum. “But he’s also competing with guys like Marco Estrada, who was acquired from the Brewers for Adam Lind in the off-season. There’s a number of candidates with huge upside, but my inclination is Norris will win the job come spring.”

“The Jays should make the playoffs, but I see them being a wild card” – Adam Goldman

The Blue Jays spent big money in the off-season. They have a total payroll of just under $128.5 million for the 2015 season, making the Jays the eighth-highest paid team in the league.

“The strategy the Jays used this winter was to pursue guys who are lauded for their clubhouse presence,” said Birenbaum.

“The Jays wanted guys that can cultivate good chemistry with other players. These are high character, high energy and competitive players. Not only did the Jays upgrade the on-field talent, they added guys who are renowned for the impact they have off the field.”

Catcher Russell Martin was signed as a free agent to a whopping five-year, $82 million contract, replacing Dioner Navarro as the club’s primary backstop. They also brought in Josh Donaldson, the All-Star third baseman formerly of the Oakland Athletics, in exchange for a slew of players including the hot-corner high flyer, Brett Lawrie.

Donaldson was the recipient of last year’s Fielding Bible Award for being the league’s best defensive third baseman.

Third basemen Josh Donaldson of the Toronto Blue Jays throws to first base during a spring training game in Dunedin, Fla. (REUTERS)

“The addition of Russell Martin has really been helping the pitchers out a lot,” said Goldman.

“He’s a great mentor for them. Josh Donaldson also seems like a major improvement at third. He’s got a lot more power than Brett Lawrie and it seems like (Donaldson) can actually stay healthy for an entire season.”

Goldman said the addition of Martin causes problems for the depth chart.

“One of the catchers will most likely have to be traded,” said Goldman.

“(The Jays) are trying to teach Russell Martin how to catch R.A. Dickey’s knuckleball. There’s no room to have three catchers on the roster. Either Josh Thole or Dioner Navarro will have to be traded.”

Aside from the issues at the backstop position, a major question mark remains in the infield.

“The biggest positional issue is undoubtedly at second base,” said Goldman. “The new guy we picked up, Devon Travis, looks really good. It looks like he can make a push to start in the majors. Ryan Goins or Maicer Izturis could easily lose their spots, because their offense still isn’t there whatsoever.”

Positional battles often force players to compete harder to remain on the roster. With Martin, Donaldson, Saunders and Travis in the mix, many tenured Blue Jays will have to prove their value during spring training to stay as starters.

However, the AL East is still a crowded division. Toronto will have to fend off last year’s division champions, the Baltimore Orioles, who signed former Blue Jays J.P Arencibia and Travis Snider during the off-season.

The Jays will also try to take early leads over the New York Yankees and Boston Red Sox, the second and fifth-highest paid teams in the league, respectively. The Jays have also struggled in recent years against their division rival Tampa Bay Rays.

Veteran stars Edwin Encarnacion, Jose Bautista and Jose Reyes are all expected to retain their starting spots and remain as key players throughout the season.

“They’re a much stronger team heading in 2015 than they were heading into 2014,” said Birenbaum.

Outfielder Jose Bautista of the Toronto Blue Jays managed to stay healthy for almost all of 2014, putting up 35 home runs and 103 RBI’s. (REUTERS)

Last year, the Blue Jays finished third in the AL East with a record of 83-79. They finished the regular season five games back of a Wild-Card spot. The Jays held onto the number one spot from May until July, but injuries to Encarnacion, Lawrie and Lind through the All-Star break hindered the depth chart. Toronto was seceded as top dog in the division on July 4 and never regained its playoff spot.

“The Jays offense was pretty much decimated. That was supposed to be their area of strength. The Jays are built around slugging, and if the sluggers aren’t playing they’re definitely not going to win.”

Birenbaum said if the home run-hitters can stay healthy, the Blue Jays should make the playoffs.

“The recipe for success last season was to score a lot of runs and hope our pitchers can do enough to lead us to victory,” he said.

“Once the offense got hurt, the bullpen struggled. There were a number of weaknesses that were amplified by the injuries. That’s what cost the Jays their season.”

So far, the Blue Jays are an even 1-1 at Grapefruit League spring training after playing two games against the Pittsburgh Pirates.

The Jays lost their opener 8-7 to Pittsburgh, but won yesterday’s match up 4-1.

The Baltimore Orioles are next up on the Jays’ list this week and Norris is expected to pitch. The Blue Jays begin the regular season on April 6 at Yankee Stadium.