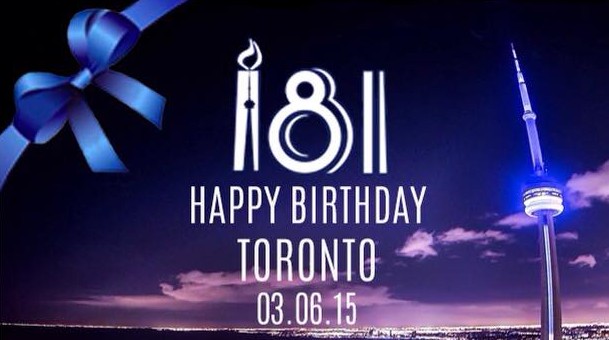 Toronto on Friday was celebrating its 181st Birthday, including a big party at the second annual Happy Birthday Toronto Celebration.

The celebration will include live music, body painters and a wall of wishes where guest can write a birthday card to the city.

“We have such a rich diversity and a growing sense of pride for all that Toronto stands for and we should have a day to celebrate exactly that,” Micayla Doria founded Happy Birthday Toronto, told Humber News.

Doria established the event in 2014 as a collaboration with businesses, local artists and entertainers to highlight the city’s diversity.

“We should have a day to celebrate” – Micayla Doria

Proceeds from the tickets will be used to support the Thank You Toronto campaign and a new nonprofit agency called The Laneway Project. Doria told Humber News.

There will also be a month long exhibit featuring local artists called,  “Toronto: Past, present and Future.”

The Laneway Project is a partnership of three smaller planning and urban design organizations. Each collaborated into a Not For Profit initiative to change Toronto’s relations with its laneways.

“Our mandate is to integrate Toronto’s laneway work into the public realm of the city, so that it’s an asset instead of an underused grey zone,” said Michelle Senayah, Co-Founder and Director of the Laneway Project.

“We’ve got more than 250 acres of publicly owned laneway space. So we thought we could be using this space more holistically and intelligently,” said Senyah.

The improvements to laneways will provide many outlets for the community such as increased space for physical activity, community events and entertainment, increased walkability and connectivity, patios, pop-up shops and unique destinations.

Community reaction has been nothing but positive. Whether on a graphic level, neighbourhood associations, community centres, residence associations or people within city divisions, “it’s been universally positive,” Senyah told Humber News.

“I feel like the time is right for this project, in the city and people are realizing that these are spaces that are under viewed and a lot of people would like to see them more than what they are at the moment,” said Senyah.

Senyah said these urban design projects will create laneways that people can bike through, kids can play in and the public space will become a network, rather than individual pockets of space.

Their website is a resource for communities to take part and create their own laneways.

Great use of a #Toronto laneway! Check out a comedy show from @BrothersDePaul at http://t.co/QQuHDaIOJU #lovethelaneways

Jamie Thompson is a participating photographer at the Happy Birthday Toronto Celebration for the second year in a row.

Thompson started his career in photography back in 2004. He said its an inspiring activity and a creative outlet and specifically enjoys photographing abandoned and deteriorated spaces.

“They all have a solitariness, a deterioration and a passage of time,” said Thompson.

Thompson told Humber News that where the photographer resides and spends their time, is where they get the most inspiration.

“I love Toronto, it’s my home,  I’m from here and there’s a lot of things in the city that can inspire me,” said Thompson.

Thompson said the best photography is to follow what inspires you and not what other people tell you.

His works are categorized in four: Linear, Central, Clarity and Industrial.