Tentative agreement reached at U of T 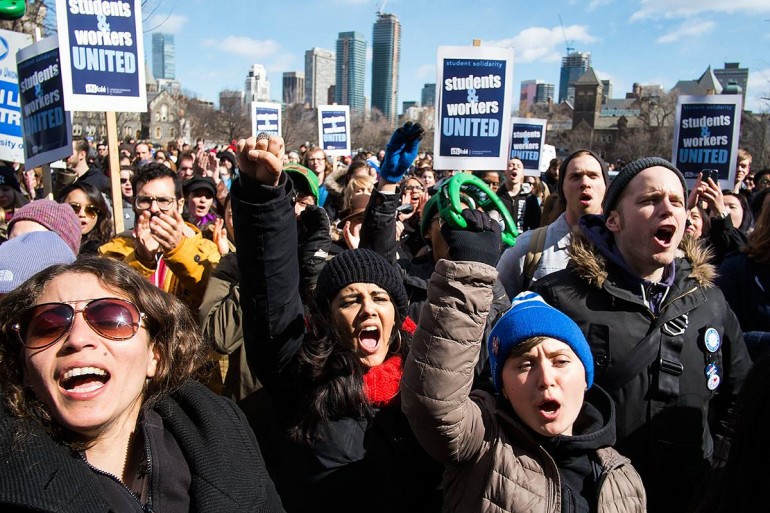 The University of Toronto and Canadian Union of Public Employees Local 3902 Unit 1, which represents some 6,000 teaching assistants, exam invigilators and other academic staff, have reached a tentative agreement.

This follows an earlier proposal that was rejected by the administration Monday evening.

“We are very pleased that we have reached a tentative agreement with CUPE’s bargaining team,” said Cheryl Regehr, Vice-President & Provost in a public statement.  The revised offer will now proceed towards ratification at a meeting of affected union members.

Martin Danyluk, a teaching assistant for the geography department at the university and said  the strength of the strike is very high and is receiving a lot of public support.

“What we want hasn’t changed throughout the strike. We’re looking for the university to provide us with a funding package that brings us to something that isn’t shamefully below the poverty line for a person living alone in Toronto,” says Danyluk.

“So far they have been unwilling to do that, so we are still fighting for it.”

At an information meeting tomorrow union members will decide whether the tentative agreement should move to the next step. All teaching assistants, lab demonstrators, and course instructors who attend the meeting can learn more about the deal and help decide whether it should go to the full membership for ratification.

If the agreement is rejected at Friday’s meeting, then the strike will go on. But if U of T staff vote to send the agreement to ratification, then all Unit 1 members will be able to vote on the offer over the weekend.

The offer will become the new collective agreement only when and if the agreement is ratified.

This means that regardless of what happens tomorrow, the strike will continue until the agreement is ratified by the membership – possibly over the weekend.

A CUPE spokesperson told Humber News that the new agreement does include an increase in funding, but some serious structural changes still need to be made.

Although this new agreement might be good news for many, U of T students still feel unsure with what will happen next.

Yameena Ahmed, a philosophy student says she is not hopeful at all for tomorrow.

“The number of times everyone has sat down and tried to reach an agreement happens far too often,” Ahmed says.

Ahmed says the school will send the students update emails to try to keep students aware of what is going on.

“The way they tailor the emails, the level of propaganda is insane.  The school insults my intelligence by assuming I don’t know what is going on.”

Teaching and graduate assistants remain on strike. However, most classes have resumed, with the remaining  classes set to restart on Monday, March 23.

Despite an agreement being reached, striking education workers from York University are widening the debate about higher education by distributing a free newspaper around the city.

Represented by Local 3903 of the Canadian Union of Public Employees, the student workers stress that their strike is about “accessible, high quality education.”

To share their message, Thomas Jones, a strike supporter and York University psychology student, stood on the street passing out copies of The Penguin newspaper.

York went on strike because of “tuition indexation,” said Jones, which is a clause in the TA and graduate assistants contract that states any tuition increase for Master or PhD students must be matched by an equal increase in funding they receive from the university.

“The Penguin is a way for the strikers voices to be heard,” he said. “Tuition indexation ensures they don’t do the same work for less money.”