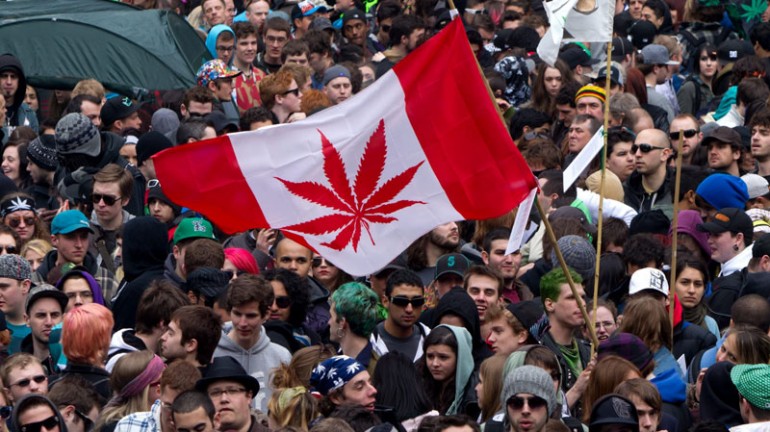 Marijuana activists gather in the streets at an annual pro-pot rally in Canada. (Daryl Dyck/ THE CANADIAN PRESS)

The Supreme Court of Canada on Friday began weighing the constitutional rights of medical marijuana users, and some are saying just having the hearing is a victory of sorts.

The court is reconsidering regulations that restrict medical marijuana users to only consuming dried cannabis.

That means patients can’t brew marijuana to drink it or mix the cannabis oil into cookies and brownies.

“The issue today is that the current marijuana regulations take away basic human rights,” John Conroy, the plaintiffs’ lawyer who is presenting the case to the high court told Humber News on Friday.

“While smoking marijuana is permitted, the doctors and other experts say smoking isn’t good for you and can be harmful. So the issue was to enable patients to access other forms that are as effective, in some cases more effective, depending on the particular person’s ailment,” Conroy said.

Siddhi/ Bhaang (derived from the cannabis plant) is consumed openly during Holi and is a part of the celebrations.
Pictured is milk ice cream with ‘Siddhi’ paste smeared on it. (Soumyadeep Paul via Flickr)

Under the current federal laws users can be charged with criminal trafficking and narcotics possession under the Controlled Drugs and Substances Act if they consume medical marijuana in any form other than smoking.

Legalizing edibles would be better because they’re bringing it out of the underground, said Mike Federman, a licensed medical marijuana user and activist in Toronto.

“They’re bringing it above board. There’s going to be standard operating procedures in place. Basically by taking it in an extract form you know you’re getting a nice, clean, organic edible,” he told Humber News.

The case before the Supreme Court involves four B.C.-based patients who were a part of the old Medical Marihuana Access Regulations program.

Conroy, an Abbotsford, B.C. lawyer and also a marijuana rights activist, is leading the charge against the federal government.

Conroy argues that the current laws take away a patient’s rights in regards to “life, liberty and security” as stated in Section 7 of the Canadian Charter of Rights and Freedoms. He said the law makes the patients’ grow-ops illegal.

The government recanted the old rules, known as MMAR, on April 1 of last year and legislated new rules which continue to limit marijuana use to dry plant buds only.

“So the argument was that limitation in the MMAR was unconstitutional and was being too restrictive,“ said Conroy.

“You shouldn’t be placed in a position where you have to choose between your health and liberty because you may be committing an offense or harming your health by going without your medicine.”

“The issue was to enable patients to access other forms that are as effective, in some cases more effective, depending on the particular person’s ailment.” – John Conroy

Marijuana is seen under a magnifier at the medical marijuana farmers market at the California Heritage Market in Los Angeles, California. (REUTERS)

The debate for distribution rights began after the arrest in 2009 of Owen Smith, a Victoria man who is the former head baker for the Cannabis Buyers Club of Canada.

Upon Smith’s arrest, police found more than 200 pot cookies and cannabis-infused olive oil in his apartment. He was charged with possession for the purpose of trafficking and unlawful possession of marijuana.

Kirk Tousaw, Smith’s lawyer, said that the regulation was unconstitutional and didn’t protect the public’s health and safety.

The old laws stated that people who are chronically ill can only smoke medical cannabis, which could be more harmful, he said at Smith’s trial in 2012.

Tetrahydrocannabinol, or THC, is the principal psychoactive ingredient in cannabis.

It’s the most prevalent compound in marijuana that basically works because it mimics some neurotransmitters that we have, said Jose Lanca, professor of pharmacology at U of T who specializes in herbal and natural medications.

For example, when people take opiates, the substances work because they’re accepted by brain receptors that receive natural occurring opioids in the brain.

The difference with marijuana consumption is the amounts of natural brain chemicals that mimic the effects of marijuana exist in very low doses, Lanca said.

“This is what makes people feel high,” he said. “THC does what other neurotransmitters normally do in the brain, just in an exaggerated way.”

Another concern related to legalizing pot-laced edible food is its sale on the black market. Police have said it can be difficult to determine whether a patient has more marijuana than the authorized amount.

However, some experts are critical of the health benefits related to consuming marijuana rather than smoking it.

Lanca said the benefits of ingesting pot are very limited.

“It’s unthinkable to portray [marijuana] as not having risks; its natural, but it has potential risks,” he said.

“Ingesting it removes the address effects that are inherent in THC smoke, but the harmful effects of THC are still present. Tobacco is also natural, but it has poisons and carcinogens. The same goes for marijuana.”

Some members of Canada’s medical marijuana community say that just having the hearing at the Supreme Court is a victory.

“The actual act of smoking it doesn’t bother me whatsoever. The THC is 100 per cent a health benefit for me. It doesn’t matter what form it comes in,” he said.

Federman also said the health benefits of marijuana go much farther than the issue of smoking or eating it.

“I’m much more relaxed because of the prescribed marijuana. I don’t have the intense pain I used to have. It’s also very pleasurable for me to use,” he said.

In regards to the Supreme Court case, Federman said the importance of regulating marijuana extract will “help bring weed out of the underground.”

Still the case may go on for quite some time. Conroy said he expects the trial to last for the rest of this year, with a decision expected some time in 2016.