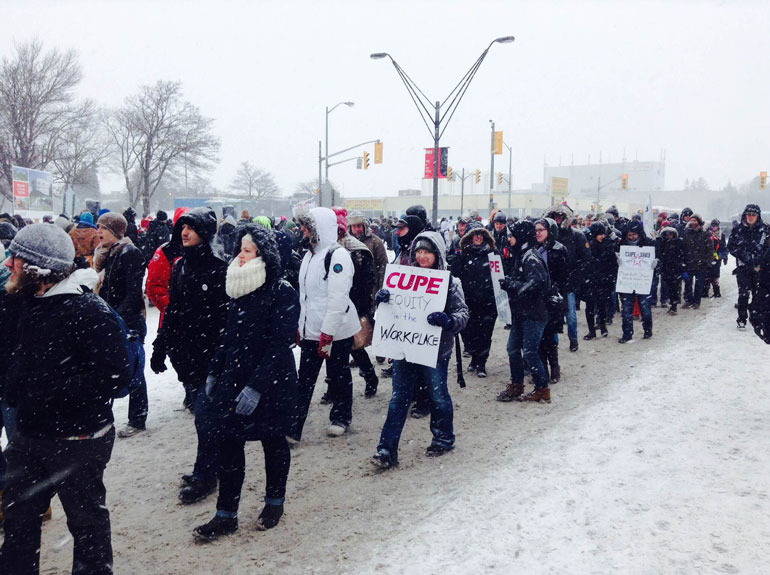 Hundreds of teaching assistants and contract faculty formed picket lines at York University on Tuesday while 55,000 students were stuck in limbo with cancelled classes.

York’s president Mamdouh Shoukri issued a statement on Monday night after the school’s latest offer was rejected by nearly 70 per cent of the Canadian Union of Public Employees (CUPE) 3903.

“We have made every reasonable effort to avoid a labour disruption, and we continue to believe that a settlement is readily achievable,” said Shoukri. “We look forward to continuing negotiations with CUPE 3903 as soon as possible.”

CUPE 3903 Chair Faiz Ahmed told Humber News that job security was the most important issue for the contract faculty and TAs, who account for 64 per cent of the teaching at York.

“These teachers are slotted into a course every year,” said Ahmed. “They have no guarantee that they’ll be teaching that course year after year.”

Ahmed said he would prefer a collaborative effort between York and the union of 3,700 members in order to tackle structural issues related to the school’s budget.

“The university and the union agree that this is a funding issue from Queen’s Park,” he said. “We are looking for the university to be a partner while we lobby and demand for more funding to postsecondary education.”

Ontario Federation of Labour president Sid Ryan said life beyond the classroom can be very difficult for contracted faculty.

A year-to-year contract “makes it impossible to be able go to the bank to get a mortgage,” said Ryan. “You can’t be guaranteed that you’ll have a job next year.”

Ryan also expressed his concerns for contracted faculty who have to commute out of town to work at universities such as Guelph and McMaster.

“(Contracted faculty) are constantly on the highway,” noted Ryan. “[It’s] almost like living out of their cars and they don’t get compensated for it. That makes it practically impossible to do any research for publishing.”

“A good education comes from people who are not scared of losing their jobs… that are not overworked or stressed out, “said Enright.  “If those things can be mitigated, the quality of my education will be better.”

This York undergrad, with a huge debt load and academic pressure, will be on the picket line in solidarity with #CUPE3903 #YorkU

Enright said he was startled in December after he wrote an exam and witnessed a teaching assistant’s massive workload.

“I helped one TA carry three boxes of those completed exams back to her office,” said Enright. “Those were the exams that she was marking by herself.”

CUPE 3093 members walked off the job Dec. 2008 in a labour dispute that lasted three months. The provincial government passed legislation to end to the strike, but many classes were extended into the summer.

Other students such as second-year psychology student Elise Casimiri are anxious to return to the classroom with the end of the academic calendar looming.

“If the strike goes on for a long time like it did in 2008, I’m going to assume that I’m going to have to make up that class time during the summer,” said Casimiri. “I was planning on taking summer courses as well so it’s just going to push everything further along.”