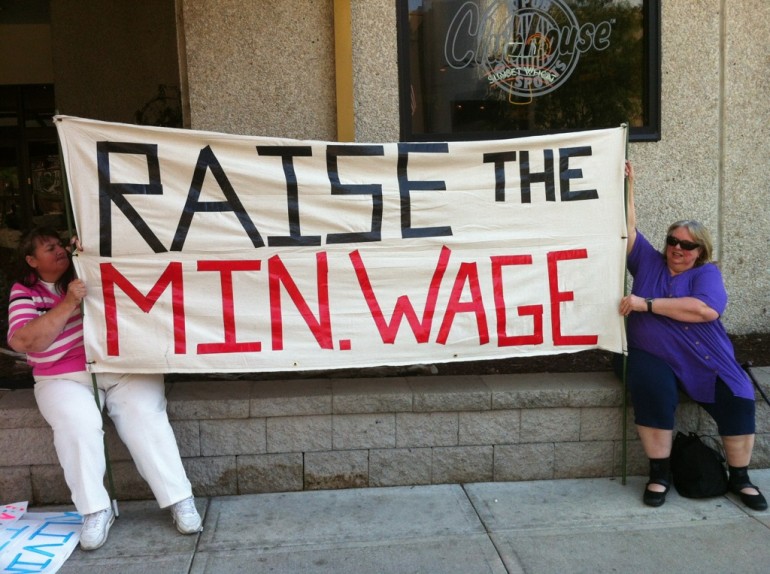 Ontario minimum wage will be $11.25 per hour as of Oct. 1 (OFL Communications/Flickr)

Ontario is raising its general minimum wage rate to $11.25 an hour starting on Oct. 1.

Ontario’s Ministry of Labour said in the release that increasing the minimum wage is a part of the government’s economic plan for the province.

The minimum wage for special category jobs, such as liquor servers, homeworkers and students are also increasing at the same time.

The government plan calls for minimum wage to increase every year tied to Ontario’s consumer price Some students are not impressed with the 25 cent an hour increase.

Sabrina Thomason, a culinary management graduate, said  the wage increase can help a lot of people to feel less stressed about their debts and living costs, but she said she believes the minimum wage is still too low, especially for students.

“A lot of students are trying to pay their way through school but can’t get a job that pays more than minimum wage, so it’s definitely not enough to support average students or average people who only work part-time,” said Thomason.

Imran Samad, a resumé tutor at the Career Centre at Humber College, the government is moving to the right direction by raising the minimum wage for Ontario workers, including students.

“[The money] can go far for them not only to offset daily, weekly, monthly expenses, but in terms of keeping themselves occupied and getting financial returns during the summer, even for work-study students here,” said Samad.

Students may also be able to pay off student loans, he said.

This will be the ninth minimum wage increase since 2003.

In the press release, Kevin Flynn, Ontario’s Minister of Labour, stated the increase in minimum wage is to ensure workers to keep pace with economic inflation and so businesses to have time to prepare for payroll changes.

Meaghan Dimock, a second-year esthetician and spa management student at Humber, said the government must raise the minimum wage because living costs that keep going up.

“Even though it’s only [going up] by 25 cents, it will help with even living life,” said Dimock. “That means able to afford proper housing, food costs and everything.”

Oladapo Olowoyeye, a first-year practical nursing student is not convinced. She thinks the planned minimum wage will still not be enough.

“Seriously, you cannot really do anything with the money,” said Oloweyeye.

Olowoyeye said he used to work for $11 per hour so he knows how much he’s made by the end of the year. He said unless you’re living with your parents, the money is “basically nothing.”

“When you’re taking care of yourself, you pay bills and stuff. That [amount] is not enough,” he said.

The government plans to tie further increases in the minimum wage to the consumer price index for Ontario.  In future years any increase will be announced by April 1 and will be effective October 1 to give businesses an opportunity to plan.