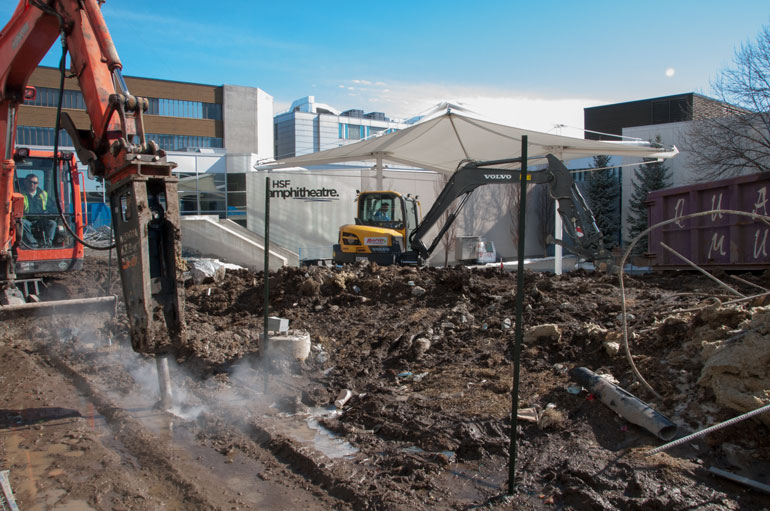 The HSF amphitheater is getting a makeover.

The Humber Student Fedaration has teamed up with Eastern Construction, a Toronto-based construction company to redesign the amphitheater, located outside of F building at North campus .

The plan to redesign the outdoor amphitheater was originally approved  last summer,  however, it was put on hold until the area could be cleared up to make it look nicer, said Steve Gray, project manager for Eastern Construction.

Gray said they’re doing it now to accommodate students and their outdoor surroundings.

He also said there are about 10-30 workers working on this project.

The theater is being redesigned to include more events and entertainment shows organized by HSF in the future.

HSF executive director Ercole Perrone said the team 0f vice presidents and the president decided to redesign because the amphitheater was not being used.

“We invited students to redesign the amphitheater…making it more student-friendly. We got submissions, and selected a few winners based on the designs,” says Perrone.

The redesign project has approved a $2 million budget.

Perrone expects the construction will be completed by the beginning of August and they hope to be using the newly finished amphitheater for student orientation, frosh week and other outdoor activities in the long-term.

The amphitheater will also be open during the winter for winter-related programs.

Humber College president Chris Whitaker said this project has been underway for a couple of years.

“I believe it was last year, they had a competition where they were seeking student input in the redesign of the amphitheater,” said Whitaker.

“It’s been a while since any work has been done and there was some question about how accessible and usable the current structure is.”

Whitaker said he believes the HSF wanted to move forward with the project by pulling out the designs and called professionals to help make the current vision.

The HSF amphitheater is expected to look like usable space for students and seasonal activities when it opens in August.