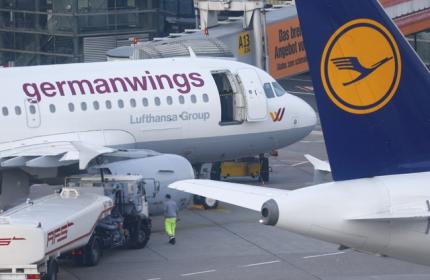 Germanwings airline crashed in a remote snowy area of the French Alps on Tuesday, killing all 150 on board (REUTERS)

The co-pilot of a Germanwings airliner that crashed in the southern French Alps on Tuesday locked the pilot out of the cockpit intentionally, a French prosecutor said Thursday morning.

The Airbus A320 was bound for Duesseldorf from Barcelona, when it descended from its cruising altitude and slammed into a remote mountainside killing all 150 people on board.

“This makes us speechless. We here at Germanwings…we are shocked, we are in dismay. I could not have imagined that this is even getting worse,” said CEO of Lufthansa airlines, Carsten Spohr, at a news conference.

After the voice recorder was analyzed, there was quite a turn in information, he said.

Officials said the co-pilot passed all medical tests, flight examinations and was 100 per cent fit to fly without restrictions.

“His flight performance was perfect, there was nothing to worry about.”

But, “there are no special psychological tests for pilots,” officials said.

Lufthansa CEO says pilot of Germanwings waited until plane was at cruising altitude before leaving cockpit. Co-pilot was in full control when pilot left.

There are only speculations about the motives.

“We have no findings at all with regards to why the co-pilot did it,” an official said. “I would like to express that this is really a horrible event for our company, I continue to fully trust our pilots, they are, and remain the best ones in the world,” said Spohr.

Lubitz had been with Germanwings since September 2013 and had logged 630 flight hours. He trained at the airline’s flight center in Bremen, Germany, and at a related facility in Phoenix, Ariz., Spohr told media this morning.

According to Reuters, there were 150 passengers on board: 144 passengers and six crew members.

“Since the crash, relatives are being looked after…together with the authorities we made sure the relatives were not informed via the media,” said Spohr.

“My experience is that human beings respond in different ways, of course everybody is in grief, in mourning,” said Spohr.

Just before the crash, screams could be heard on the audio recording, the prosecutor told reporters.

Since the Sept. 11 attacks, it has been standard operating procedure for airlines in the United States to require a flight attendant to be present in the cockpit when one of the pilots steps out.

But airlines in Europe do not have that requirement, Spohr said.

CXN: Need for 2 flight crew in cockpit at all times is an airline rule, even in US. Europe considers policy change after #Germanwings crash. — CBC News Alerts (@CBCAlerts) March 26, 2015

During the conference, officials said either the captain who tried to get into the cockpit didn’t use the code (which all pilots know) or the colleague entered the code and the pilot inside put the lever on lock, preventing the door from being opened electronically.

Blackbox audio recordings conclude that the co-pilot was solely responsible for planes descent.

“As the CEO of the company I would say that if one person kills himself and also 149 people, another word should be used, not suicide,” Sphor said at the conference.

The investigation is ongoing.

With files from Janie Ginsberg