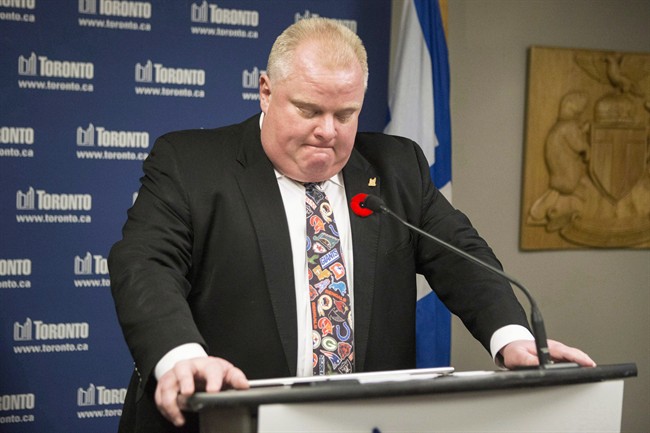 Rob Ford apologized today for racially insensitive remarks he made while mayor.

Etobicoke got a lot of attention at Tuesday’s City Council meeting.

First, Ward 2 Councillor Rob Ford apologized for making racist remarks in 2012 and 2014 while mayor in an emotional statement during today’s meeting.

“I’m aware of my hurtful nature of my comments and the fact that they are absolutely unacceptable,” said Ford. “I’m deeply ashamed of what I said and I recognize that they bring discredit to both myself and council as a whole.”

“I’m aware of my hurtful nature of my comments and the fact that they are absolutely unacceptable.” – Ford

“I wish to offer my heartfelt apology for my words and actions,” he said.

Full video of Ford’s apology can be found here.

Ford’s apology came in the wake of a report by Toronto’s integrity commissioner Valerie Jepson that he breached Toronto’s Code of Conduct by making racially insensitive remarks about Jews, Italians and blacks.

“In response to this complaint, Mr. Ford did not dispute the allegations or defend his actions,” Jepson wrote in her report.

“However, should Mr. Ford engage in similar conduct in the future, it may be necessary to consider more significant penalties.” – Jepson

Ford previously apologized for his remarks in June 2014, but Jepson required that he offer a more formal apology to Council, and she would not “take further action” on the complaint.

“However, should Mr. Ford engage in similar conduct in the future, it may be necessary to consider more significant penalties,” she wrote.

Samuel Getachew, who filed the complaint, said he accepted Ford’s apology, but later took to Twitter to comment on Ford’s behaviour after the apology:

Just shook hands with Rob Ford/wished him well /told him I accepted his apology.He said"was that u who complained about me"/pushed me away.

Etobicoke also came up when council was scheduled to discuss the proposal to expand gambling at Woodbine Racetrack.

The consultation process would include a public meeting in Etobicoke, an online questionnaire on the city’s website, and a city-wide public opinion poll, according to a text of the motion.

More reactions to Ford’s apology can be found below.