Flying car could be available by 2017 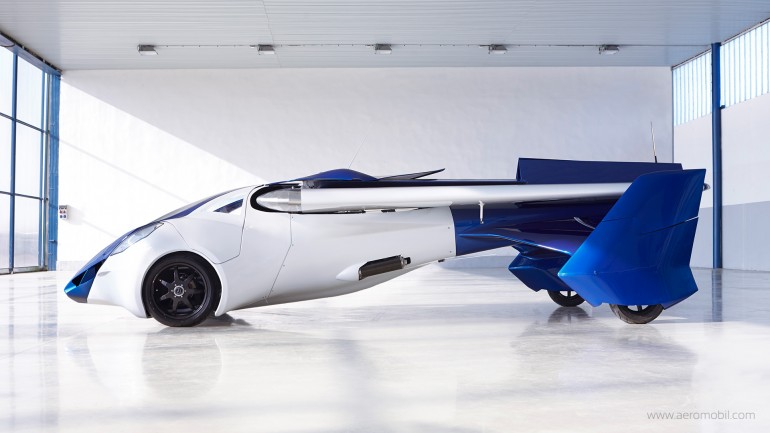 Slovakian company AeroMobil announced Sunday that they hope to make its flying car, the AeroMobil 3.0, available for purchase by 2017.

If you were to take someone from the 1950s, put them in a time machine and transport them to 2015, one of the first questions on their mind would likely be “Where are the flying cars?”

Just wait a couple more years, you could reply.

“We believe that 2017 we’ll be able to launch this to market,” said AeroMobil CEO, Juraj Vaculik, speaking at South By Southwest Interactive conference in Austin, Texas on Sunday.

The sleek, ultra-modern hybrid machine sits at a tiny 2.2 x 6 metres when in car mode, with an eight metre wing span when expanded into its flying form according to the AeroMobil website.

“It’s cool, but if you want a fast car, you’d buy a fast car, and vice versa for a plane.” – Samuel Sainty

It runs on standard petrol, available at any gas station, and has a range of 875km in car mode and 700 km in plane mode.

The vehicle can fit into a standard parking space, only requires 200m of landing strip and can land on either pavement or grass.

Specific pricing hasn’t been mentioned yet, but Vaculik said the cost will sit somewhere around several hundred thousand euros.

Samuel Sainty, senior development powertrain engineer with Mahle Powertrain in the United Kingdom, told Humber News Monday that the merging of car and plane has “little to no practicality.”

“The wheelbase rules it out of being enjoyable to drive, and the concessions to make it a plane you can drive will have taken away from its ability to fly,” he said

“It’s cool, but if you want a fast car, you’d buy a fast car, and vice versa for a plane. It has to compete against very developed and established technologies.” said Sainty

With the current speculation of a high price tag, it’s clear that this machine isn’t for most, and even if it were to become more affordable there are still a lot of hoops to jump through to legally and successfully pilot one.

According to the AeroMobil website, a Private Pilot Licence (PPL) is required to fly the machine.

Getting one of these licenses isn’t easy though. Wajih Zafir, a flight instructor with Toronto Airways said that “getting a pilot’s license isn’t for everybody.”

Zafir continued, saying “There is a lot of external studying to do initially, the private license, which is the first license, is the hardest to get. I don’t think this will become common right away.”

The ability to basically land and take off almost anywhere is another highly touted feature of the AeroMobil, but even with the capacity to land on both pavement and grass landing strips of only 200m, pilots won’t be allowed to just land in a football field or suburban street.

“200m is typically how much our Cessna would land in, so that’s pretty much the same. That will bring up lots of issues, like noise, what’s in the way when coming in for the approach. If you’re building something near an airport you need approval for approaches, and way points to get to a run way are scattered all over the place,” Zafir said.

Sainty also said that the path won’t be easy for any average Joe to buy one and fly or land it wherever they please.

“There’s so many regulatory bodies it would have to pass for civilian use, and the aeronautical bodies are strict.”