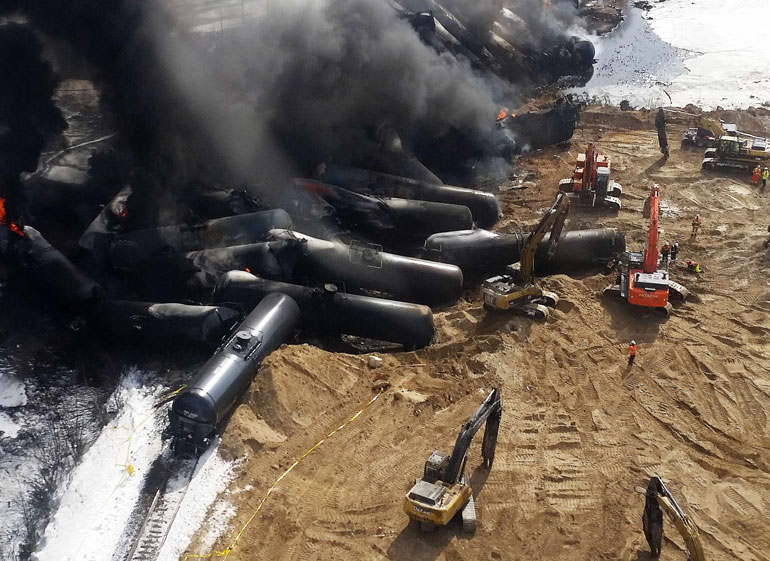 Smoke rises from fires caused by the derailment of a CN Railway train carrying crude oil near the northern Ontario community of Gogama on March 8. The derailment, which occurred March 7 is CN’s second in the region in just three days. (Reuters)

Cleanup efforts are underway after the derailment of a train carrying crude oil near the northern Ontario town of Gogama, a spill that has once again raised concerns about the safety of transporting oil by rail.

On Saturday, several cars of a train – carrying crude oil from Alberta – jumped the track and caught fire, according to the CBC.

CN Rail confirmed via Twitter that 38 cars were involved in the derailment:

Kate Jordan, coordinator of media relations with the Ontario Ministry of the Environment and Climate Change, told Humber News that ministry staff have been at the location of the derailment since Saturday.

“We are working hard to assess the situation,” she said. “Clean-up work is underway, but fire has prevented a lot of access to the site.”

Jordan said CN has put containment measures in place, such as placing booms in the river to prevent the flow of oil and vacuum trucks to remove as much oil as they can from the river.

“The fire is also under control,” she said.

The incident at Gogama is once again causing people to question the suitability of transporting oil by rail, which has intensified since the disaster at Lac-Mégantic in July 2013.

There was another derailment near Gogama in February, which resulted in the spill of more than 1 million litres of crude oil and petroleum distilate.

“We need much stronger standards for rail cars,” he said. “Plus, emergency preparedness [in cities that have oil cars running through them] is not up to snuff.”

Scott also said one thing that doesn’t get mentioned very often is that “once the clean-up crews leave, problems still linger.”

He said that the Chaudiere River, which runs through the town of Lac-Mégantic disaster, is still contaminated by oil and there is significant soil contamination in the area.

“Oil weathers and breaks up,” he said. “It contains toxic chemicals and hydrocarbons that can cause cancer and blood disease.”

He pointed out that people are still finding tar balls in the Kalamazoo River in Michigan, which was affected by an oil spill in July 2010 when a pipeline ruptured.

People near the Gogama site are also expressing concern.

According to a CP report, Chief Walter Naveau of the Mattigami First Nation said his community “does not feel safe” after the current derailment, and has great concerns about environmental effects and those of smoke inhalation.

The federal government, responsible for rail safety, must do more to protect our communities and the environment pic.twitter.com/XE2dgTn9go

.@GlennThibeault Very concerned by this train derailment. Relieved no one was hurt. Feds must do more for #RailSafety pic.twitter.com/WIMFkdt4Nj

“This train derailment is very concerning to our government, as rail safety has been a top priority in our discussions with our federal and provincial counterparts over the past number of years,” said Del Duca in a statement released to Humber News.

“I will be contacting Federal Transport Minister Lisa Raitt, CN and CP this week to reiterate our government’s serious concerns with respect to ensuring our railways are safe.”

The reason for the derailment is still unknown.