Anti-Abortion display leads to protest at University of Alberta 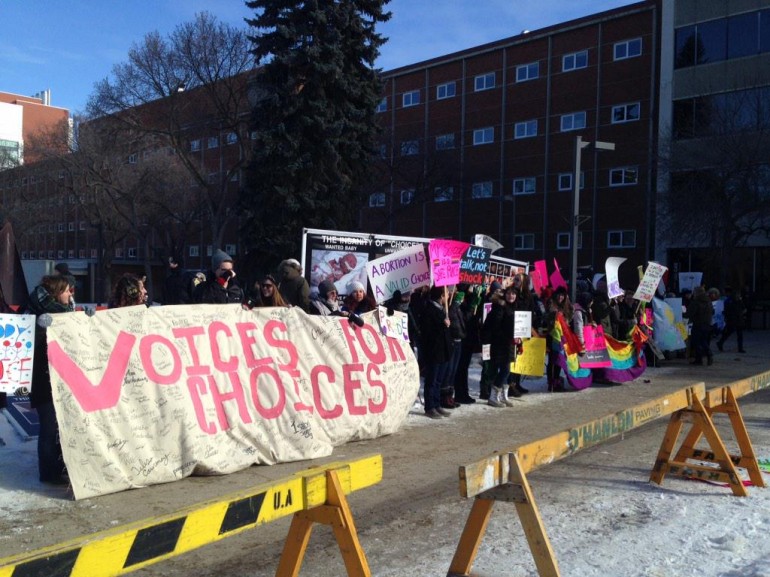 Go Life, a pro life club at the University of Alberta (UofA), put up an anti-abortion display Tuesday on their campus which was met with a protest from students, but not the university.

President of the Go Life club, Amberlee Nicol, told Humber News Tuesday that the purpose of the display was to inform students.

“What we’re trying to do is raise awareness about the reality of what abortion does to a human being,” said Nicol. “Abortion dismembers, decapitates and disembowels a human being.”

But those who armed themselves with signs and banners in protest blocked the display from being seen by anyone walking by for much of the day.

Protester and UofA student, Marissa Gutsch, told Humber News that, at it’s peak, there were between 100 and 200 people helping to hide the pictures of the aborted fetuses.

Gutsch said the movement against the display began when “trigger warning posters,” were put up around campus to notify students that a graphic display was to be put up in the campus’ main quad.

In a statement on Friday, UofA president Indira Samarasekera wrote the school was allowing the display to go up because it supports the “right of expression” and it is their “duty to foster and facilitate discussion and debate.”

Nicol said she was disappointed that those who chose to protest didn’t share the presidents views.

But Gutsch said the organizers of the protest were concerned with the graphic nature of the images, not the opinions of the Go Life group.

“Freedom of speech is very important. We’re not against the ideas of pro-life, it’s against using graphic images to shock and shame” said Gutsch. “Students, staff, faculty members or anyone else that might be visiting campus could be traumatized by such events and it’s not fair to ask your student body population to avoid a whole section of campus because they don’t want to see something that negative.”

Gutsch said they contacted the university with their concerns. Specifically they said the display infringed on section 30.3.4(3) of UofA’s code of student behaviour, which regards the dissemination of malicious material.

It states “No student shall disseminate or cause to be disseminated malicious or defamatory material or engage in activity which creates a social or academic climate that hinders or prevents the full participation of another person or group in the life of the University.”

The display went up anyway. Gutsch said they were blocking the display but they weren’t attempting to stop anyone from Go Life from talking to people or vice versa.

“We weren’t going to stop someone if the wanted to see it, that’s completely their right,” said Gutsch.

And Nicol said they were able to speak to some despite the protest.

“In spite of the difficulties we had great conversations,” said Nicol. “Today has still been a positive.”

The display came down by 4 p.m. Tuesday but Go Life is scheduled to put it back up again in the quad on Wednesday and Gutsch, as well as the many other protesters, plan on returning as well.

Nicol said she plans to speak to campus security beforehand to see if they can do anything to stop the protesters from blocking their display for the second straight day, but if that isn’t possible they will proceed as planned.