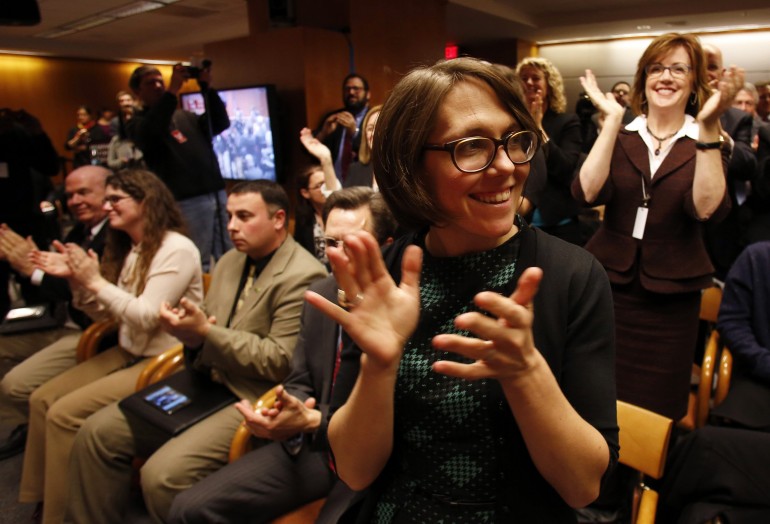 Audience members react after the U.S. Federal Communications Commission (FCC) voted in favor of net neutrality at a hearing in Washington on February 26, 2015. (REUTERS)

The open Internet is finally back.

The Federal Communications Commission (FCC), the U.S. regulator of radio, television, wire, satellite and cable communications, has voted to adopt statutes that will level out the playing field for Internet service providers (ISPs). All corporations and Internet users will be considered equal, meaning large ISPs will be unable to continue to pay for prioritized speed and data access. This also overturns state laws that were implemented to protect ISPs from local competition. The Internet will be considered a public service.

It’s being called a huge victory for the general public.

The FCC announced on January 31 it would vote to apply a longstanding statute of the Communications Act of 1934 to the Internet. The vote on whether to apply Title II of the communications act passed today. Title II refers to laws affecting common carriers and broadcast services, and includes provisions that cover the flexibility and use of revenues of communication companies.

According to the FCC website, today’s ruling should “ensure that Americans reap the economic, social, and civic benefits of an open Internet today and into the future.”

The common term for this kind of Internet equality is net neutrality, a term coined by Tim Wu, a Columbia University media law professor.

Net neutrality refers to the principle that governments, institutions and ISPs all should treat Internet data equally. That means service equality for all people and companies who use the Internet, with ISPs unable to discriminate or charge customers differentially. No one gets to ride in the fast lane.

As voted today, the FCC’s new rules forbid phone, Internet and cable corporations from selling various speeds based on priority. ISPs will also be no longer able to block certain sites or slow down data access. Relying on Title II of the communications act, the FCC should have enough legal backing for the laws to stand up in court. Many experts have already said the new net neutrality rules will impact everyday Internet users tremendously, but in mostly positive ways.

Today, to say the least, is a big day for open internet & Net Neutrality aficionados. At a minimum, an astounding political victory.

Previously, the pay-to-play rules the FCC implemented in April of last year gave many high-speed service providers the flexibility to make their own rules. ISP powerhouses like Verizon Communications and Comcast Corporation, the world’s largest broadcast and cable company, were given the freedom to choose which content would move fastest online, based on which client paid the most. ISPs were also able to block sites, or throttle them. ISPs gave preferential treatment to large companies who paid more, like Netflix and Amazon, which require fast Internet speed to transfer massive amounts of data to consumers. Many smaller firms couldn’t afford to pay for fast enough web speed to operate at a normal frequency. That’s when public campaigns in favor of net neutrality started worldwide.

Why the FCC can’t save Net Neutrality, plus real examples of how ISPs have blocked content in the past: https://t.co/D8zixLdLdY

I signed the net neutrality petition and you should too! Save the Internet! http://t.co/9WlZEolgeA

Supporters of the net neutrality laws include the Electronic Frontier Foundation (EFF), a nonprofit organization that defends civil freedoms in the digital and online world. The EFF said it has urged the FCC to analyze misinformation from service providers and to protect the “open Internet.” Corynne McSherry, Intellectual Property Director of EFF, had previously said the FCC was holding back most common Internet users.

“The FCC is going down a dangerous path, risking future Internet expression and innovation, and the big ISPs are encouraging the commission every step of the way,” said McSherry. “Will the FCC respond to the pleas of more than a million Internet users and do its part to protect net neutrality? Or will it open the door to a tiered Internet, with ISPs serving as gatekeepers for their subscribers?”

However, there have been critics of the net neutrality laws. Some consumers have disagreed with the need for web equality, and argue that a tiered Internet with data discrimination will slow down browsing speed.

“I just think slowing down the Internet is a quick and not thorough fix or answer for this Internet battle,” said Zayury Rabadan, a radiography student at Wright College in Chicago. “I think a lot of people are already suffering with their bad connections and slow Internet as it is and to make it even slower, that’s horrible.”

It should be noted that the Internet isn’t being slowed down. Rather, websites that were paying to produce faster will rejoin the rest of the Internet on a level data-transfer field. Other sites that couldn’t afford the fast transfer speeds before will now be able to function at the same capacity as larger sites. This change should benefit the majority of small websites and companies that don’t need the exception of prioritized data.

Major sites that were paying to ride in the fast lane include Netflix and Amazon. Both sites rely on transferring massive amounts of data per second to consumers. Therefore paying ISPs for prioritized speed was necessary for these sites to continue operating after the FCC first implemented the prioritized data laws last year. Although there was increased speed on their sites online, these companies shelled out funds to providers in order to maintain a quality service. The new FCC statutes mean popular sites like Netflix and Amazon will use standard data-transfer speeds, but they no longer have to pay to maintain those speeds.

Joshua Gans, a professor at the Joseph L. Rotman School of Management who specializes in Internet conduct and technology, said you shouldn’t expect your modem speed at home to slow down whatsoever.

“(Net neutrality) shouldn’t affect anything at the consumer level right away,” said Gans. “It should stop the bigger companies from limiting some content in the future. When you go on the Internet now, it’s all the same when viewing pages. The new laws won’t really affect the consumer so much – there’s a bigger effect on corporations that regulate their own traffic.”

The FCC’s decision to create laws supporting net neutrality mimics the policy already in place north of the border. Canadian laws have reflected net neutrality for years. Telecommunications companies in Canada are only allowed to interfere with web traffic as a last resort. Instead, ISPs must use economic measures to alter Internet traffic, such as usage limits and new investment. The Canadian Radio-television and Telecommunications Commission issued Canada’s net neutrality laws in October 2009.