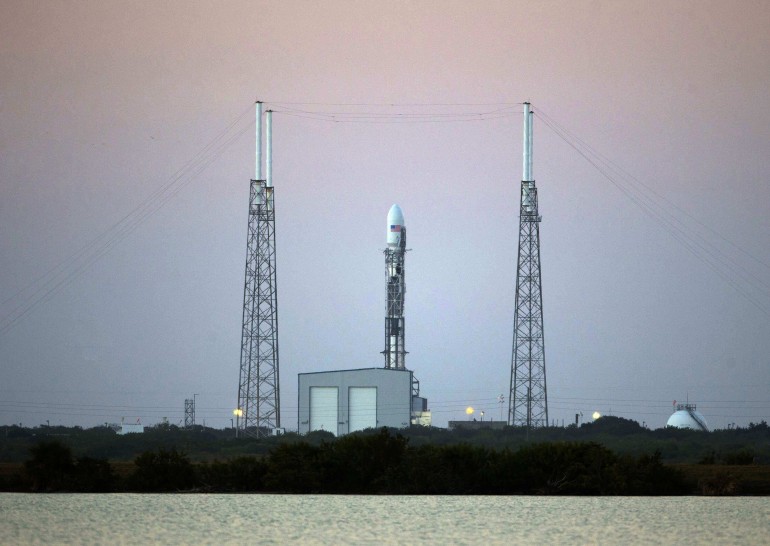 The unmanned Falcon 9 rocket won’t be launched on Monday. (Reuters)

NASA said they elected to push it back another day because there will be a high chance of favourable weather on Tuesday.

The DSCOVR’s launch was originally scheduled for Sunday, but was rescheduled for Monday due to a “range check issue” tweeted Elon Musk.

According to the National Oceanic and Atmospheric Administration (NOAA) website, the DSCOVR satellite will monitor solar wind in real-time which is critical for accuracy and NOAA’s space weather alerts and forecasts.

“There are a variety of concerns with solar winds,” said Richard Collins, member of the space physics group at the University of Alaska’s Geophysical Institute.

Solar winds are caused by sun particles traveling to the Earth and can cause damage to communication systems.

The winds travel to the Earth and create electricity that can impact magnetic fields on the Earth.

“We can’t control solar winds,” said Collins, but the question is how do we respond. He said, cities might borrow power from other plants if solar winds impact electricity in vulnerable areas.

“You can’t reliably predict the storms from Earth-based devices, you need the satellite out there, so having that extra hour warning ahead of time allows us to begin and put procedures in place to protect our system, so whatever outages may occur we can quickly restore customers,” said David Velazquez, the executive vice president of Pepco Holdings Inc in a NOAA video.

The winds effect the entire Earth, but it does most of its damage in Canada, Northern U.SA, Europe and Russia. “Anything mid latitude,” Collins said.

Collins said you know solar winds are happening when you see the Aurora Borealis (Northern Lights).

The launch is set for Tuesday after another delay. (Reuters)

According to the NASA website, the DSCOVR spacecraft will orbit between the Earth and the sun, providing advanced warning of extreme emissions, and it will also measure the radiation.

DSCOVR’s orbit will be at the L1 point in space. According to NASA L1 means the Lagrange point 1 which is approximately one million miles away from the Earth. It will take 110 days for it to arrive at its orbit.

At the L1 point DSCOVR will provide a point of early warning and it is the first instrument looking at the Earth from this point.