Friday the 13th brings out superstitions 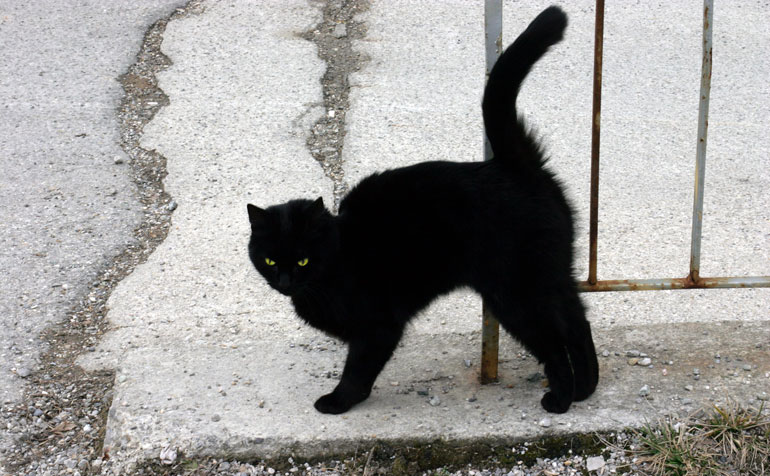 A black cat is on its guard after being spotted. (Nino Barbieri/Wikimedia)

It’s a day of battling luck as Friday the 13th has arrived again, for not once but three times this year. The last time Friday the 13th repeated more than twice in a year was in 2012.

There is no specific point in history to indicate the start of the superstition, said prominent skeptic and paranormal investigator Joe Nickell.

Nickell, who is also a Senior Research Fellow for the Committee for Skeptical Inquiry (CSI), studies friggatriskaidekaphobia, which is the fear of Friday the 13th.

“We don’t know the origins of many of them (superstitions) because they’re so old. They predate… people writing about them. The main thing is they date from a pre-scientific time. They hail from people who perhaps were not thinking in a scientific or rational or logical way,” he said.

Some of the typical bad luck superstitions for Friday the 13th are a black cat crossing your path, walking under a ladder or opening an umbrella indoors.

“We fear the unknown, and a way of controlling the unknown is to set rituals and beliefs that put a restriction on them so they won’t harm us,” said John Steckley, an anthropology professor at Humber College.

The superstition revolving around the number 13 affects more people than most believe, he said. Computers don’t have a 13 point font option and some building elevators don’t even have a 13th floor.

The phenomenon can also be seen in other countries.

Nickell said he’s seen the missing 13th floor when he traveled to Beijing several years ago.

While some people do have friggatriskaidekaphobia, phobias are only considered disorders if they stop the person from living a healthy and balanced life, according to the Health Canada website.

“The best approach would be not to focus in on it specifically, but to deal with what the person has, and why they are capable of producing a phobia like that,” Steckley said. “If I were a counsellor, I would look at the more general problem, that someone would focus that much on one thing. If a person has that emotional and psychological problem anyway, they’re going to focus in on something that’s just convenient. I would work more on generalized therapy.”

Steckley said he has not experienced any bad luck related to Friday the 13th, and he’ll also be celebrating his birthday on March 13, which falls on a Friday this year.

Friday the 13th has also been popularized by Hollywood films, like the 12-part horror film “Friday the 13th” with Freddy Kruegar.