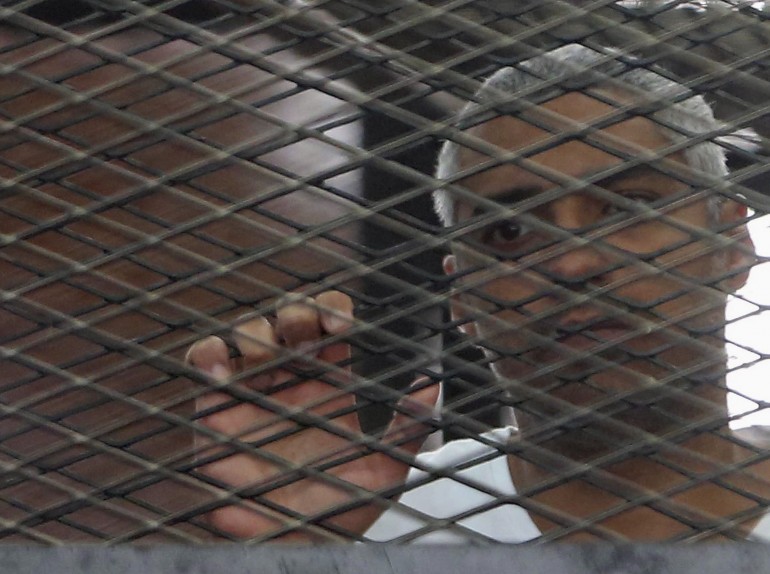 Al Jazeera journalist Mohamed Fahmy stands behind bars at a court in Cairo in this May 15, 2014 file photo (Reuters)

Egyptian-Canadian journalist Mohamed Fahmy could be freed “within hours” following his renouncing of his Egyptian citizenship, but the nine Egyptian journalists imprisoned with him may not get the same chance, a watchdog group said Tuesday.

“We’re all very worried that once international attention goes away because the Western journalists are no longer imprisoned, the Egyptian government won’t feel as if they have to release anyone else,” Alexandra Zakreski, the International Programs Coordinator for Canadian Journalists for Free Expression, told Humber News on Tuesday.

Fahmy, the acting chief of Al-Jazeera’s Egypt bureau who has been imprisoned in Egypt for the last 402 days, officially renounced his Egyptian citizenship on Monday in hopes he will be deported back to Canada, numerous sources reported.

Fahmy’s colleague and fellow Al-Jazeera journalist Peter Greste, an Australian, was freed on Sunday following an official decree from Egyptian President Abdel Fattah al-Sisi that allows for the deportation of foreign prisoners back to their home countries, provided their prosecution continues.

While the presidential decree was good news for Greste,  that the decree has no bearing on the nine Egyptian journalists also imprisoned in Cairo.

“I don’t want to say there is no chance, but the issue is that Greste and Fahmy are being released through a presidential decree that is contingent on them both being foreigners, so there is no way they will release the Egyptian prisoners based on the same decree,” Zakreski, the International Programs Coordinator for Canadian Journalists for Free Expression, told Humber News on Tuesday said.

“We’re all very worried that once international attention goes away because the Western journalists are no longer imprisoned, the Egyptian government won’t feel as if they have to release anyone else,” she said.

While it seems likely that Fahmy will be freed, there is a chance that this might be false hope.

“It seems fairly likely, ostensibly there’s nothing preventing him from being released now that he’s renounced his citizenship, but at the same time we don’t want to say anything is 100 per cent because we’ve had so many positive signals in the past, that have not come to anything,” Zakreski said.

Fahmy, Greste, and Al-Jazeera Egypt producer Baher Mohamed were imprisoned in 2013 on various charges, accused of collusion and support of the Muslim Brotherhood.

Their imprisonment was seen to be a result of their network’s connection with the government of Qatar.

The three journalists were sentenced to 7-10 years in prison, although Egypt’s Court of Cessation recently overturned their sentences and ordered a retrial. There is no official date set for that trial to begin.

Peter Greste, who spoke to Al-Jazeera Monday after arriving in Cyprus, said “I feel incredible angst about my colleagues, leaving them behind. Amidst all this relief, I still feel a sense of concern and worry. If it’s appropriate for me to be free, it’s right for all of them to be freed.

Canada’s Minister of Foreign Affairs, John Baird, said Monday that Fahmy’s release was “imminent”, and that efforts to free Fahmy were going well, and confirmed last month that Fahmy would not face prosecution upon his return to Canada. Whether or not this actually happens however, remains up in the air.

“It’s hard to say because Peter Greste was released “unconditionally”, he will not face prosecution in Australia or have to continue his sentence.

For Fahmy, he won’t face prosecution here because the charges are unconstitutional under Canadian Law, so we’re hoping he will also be released unconditionally under the same terms and conditions that Greste was,” said Zakreski.