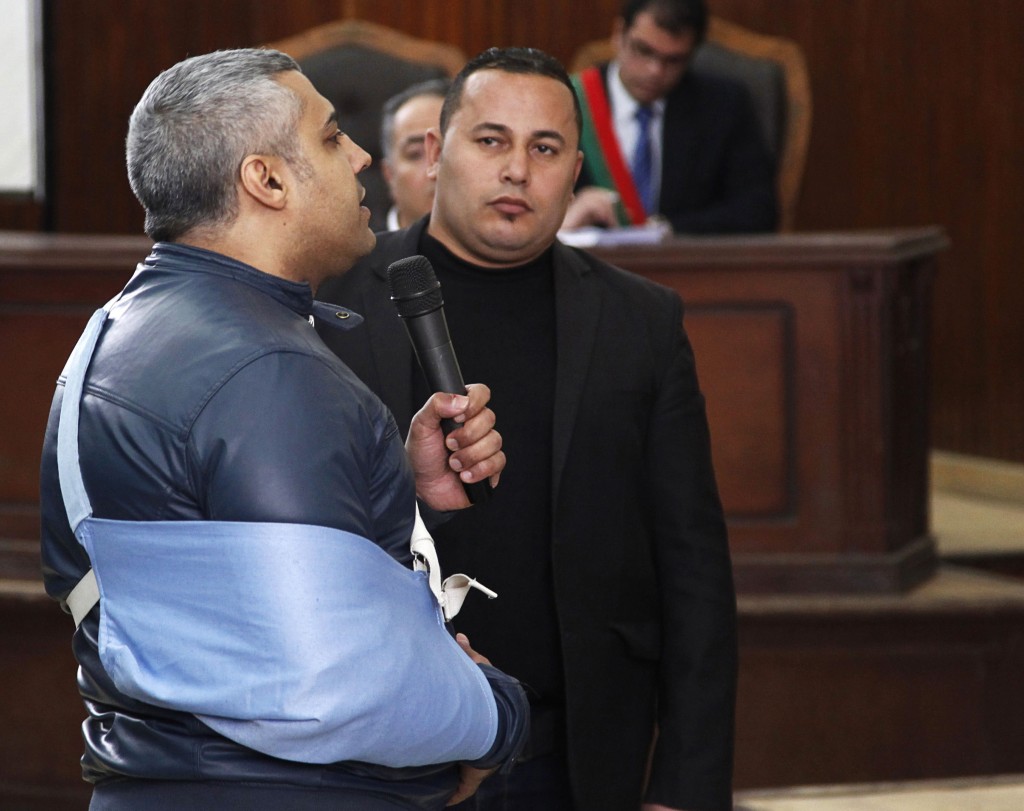 By Janie Ginsberg and Jordan Finkelstein

Two Al Jazeera journalists, Mohammed Fahmy and Baher Mohammed, were released from an Egyptian prison on Friday, after spending over a year behind bars on terrorism-related charges.

The two are scheduled for a retrial on Feb. 23.

Marwa Omara, Fahmy’s fiancee told the Reuters, “I didn’t sleep for the last year. I had to do things that I never was doing. It was very tough for me. I’m a very simple woman, not into politics, I’m not into anything. Suddenly I found myself going to see officials, and doing things I never expected myself to do. I think, now I can just relax.”

Family, friends and supporters were elated to hear the news.

Free Sunshine @CairoMarriott Where it all started with my better half Marwa Omara ” till death do us part” #Thankyou pic.twitter.com/jd976zgdDK

A spokesperson for Amnesty International told Humber News they are concerned that Fahmy was arrested without any real evidence against him.

“We viewed the whole legal process as a flawed one…most  of the allegations against Fahmy were speculation. It’s not a proper way to detain people,” they said.

The process of his release could take a lot longer than people think, the spokesperson said. “But I don’t think he would face any legal issues once he’s in Canada.”

Their economy is in trouble, Henheffer said. “They’re seeking outside investment from other countries, in order to get the support they feel they need to show that they actually have a functioning democracy.” The Al Jazeera spokesperson said that Egypt realized this was a diplomatic nightmare. “We have people all the way from Barack Obama to the British prime minister, to the Australian government. Sad to say I wish the Canadian government was a bit stronger with its comments,” he said.

Nothing could make me happier right now than to see Baher with his family. Enjoy Baher and Fahmy! #freeajstaff pic.twitter.com/q397lSn4wU — Nicole Johnston (@nicolealjazeera) February 13, 2015

The Canadian government has been criticized by many since the journalists were arrested.

“There was definitely a lack of force behind the kind of statements they were making,” said CJFE’s Zakreski. “They really didn’t have the same sort of conviction as some of the other countries that were calling for their immediate release.”

But she said the pressure seems to have picked up in the past few months.

The CAJ has been asking Prime Minister Harper to get personally involved for over six months now, and the family is upset that he hasn’t actually called Egyptian president Abdel Fattah el-Sisi since this began, said Bessner.

“I don’t think they had a damn thing to do with it,” said Henheffer.

“The Canadian government has been completely useless on this case right from the get go. It took them forever to even issue a statement, and when they finally did after Fahmy was in jail for months, it was watered down almost to the point where you could take it as a tacit approval of what the Egyptians are doing,” he said.

Henheffer also attributes the Canadian government’s abysmal reaction to the fact that Fahmy had a duel citizenship, which he no longer does.

“They don’t consider dual citizens to have the same values as citizens with one nationality. Duel citizens are every bit as much a citizen as everyone else, just maybe not in the Harper government’s eyes,” he said.

Also, the Canadian government sees Egypt as an important ally. “They don’t want to rock the boat, and their relationship with Egypt is more important to them than Mohamed Fahmy’s life,” said Henheffer.

It shouldn’t take a Twitter campaign to convince Harper to do something, said Bessner.

The events of today say a lot about the situation in Egypt, Henheffer said.

“It shows that the government is at least moving towards trying to have the image of a free press in Egypt. I think that there’s still a huge number of problems with their democratic process, and with the free press there,” he said. “They’re still requiring editors to sign a pledge of allegiance to the government, which basically makes having a free press impossible.”
The future of Fahmy is hard to know until the next hearing.

“We’ll see what happens there, it could be that the charges are dismissed…but I think that probably at the end of the trial these guys are either found innocent, or the charges are dropped at some point,” said Henheffer.

The CAJ won’t stop working until he is out of prison for good with no criminal charges against him, said Bessner. “Journalism is not a crime, the charges were ridiculous, the whole trial was ridiculous. We want him out, now.”

The events of today are a small step in the right direction.

“If these guys are released that will be a big step in the right direction, and then hopefully the government will cease to have this crackdown on good journalists who are just trying to do their work,” Henheffer said.