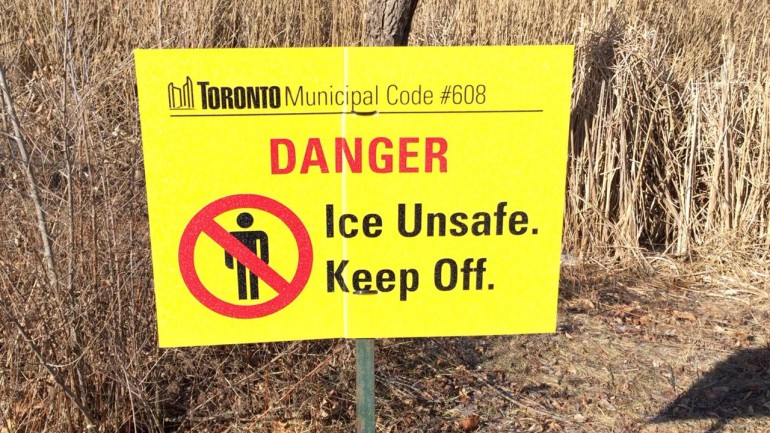 A sign erected by the City of Toronto tells skaters to keep of the ice in accordance with a city bylaw. Photo courtesy of George Emerson

Toronto’s decision to ban skating on a city pond seems silly to some, but that’s not stopping everyone from enjoying the ice.

Sanger has been skating on Grenadier Pond in High Park for several years and said that the pond has amazing ice.

On Sunday a group of skaters at Grenadier Pond were asked to come off the ice and were told that skating is banned due to safety concerns because the ice’s thickness is unknown.

David Leonard who witnessed police officers at the pond said he also saw the officers waving down people vigorously to come off of the ice.

“I understand the need for safety,” said Leonard.

“People should be able to make up their own minds with given information and measure the ice,” he said.

In an interview on CBC’s Metro Morning, City Councillor of Ward 13, Sarah Doucette, said she wants to look into asking the city’s legal department if Skate At Your Own Risk signs will reduce the city’s liability issues.

Doucette said she would like to find more ways in which the city can allow public skating on the pond.

Leonard said it’s logical to say that the officers are doing this not only to protect people from making stupid mistakes and falling through the ice, but they also want to protect themselves from liability.

Growing up in Ottawa, Sanger skated on the Rideau Canal often and said now, because of the ban, we are afraid to be Canadian.

Emerson said for the most part people skating thought it was silly that the officers were attempting to get them to come off of the ice. You can see more on his story below.

“Make $100,000 Busting Folks Like This” The Ban on Skating in Toronto by @georgeemerson on @LinkedIn https://t.co/trUKYzuVxT — George Emerson (@georgeemerson) January 26, 2015

“We don’t patrol the shores of the Humber River to make sure that people don’t go in swimming,” Emerson said.

Emerson said people can be sensible and use their own common sense.

“I just don’t get that they think they can somehow create a completely risk free environment,” he said.

Despite the current ban on skating in certain areas, skaters disregard the ban and continue to skate at their own risk on the Toronto Harbour.