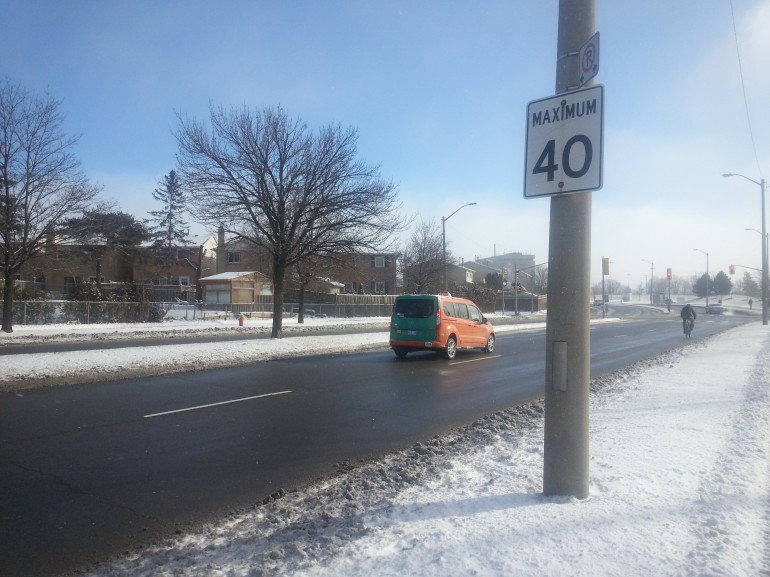 The province may lower speed limits, including the standard 50 km/h to 40 km/h (Donna Sevilla/Humber News)

Ontario is looking into decreasing speed limits in municipalities. In some areas, the standard 50 km/h may be lowered to 40 km/h.

“Municipalities have expressed the need to reduce their speed limits to enhance road safety for all road users, including pedestrians and cyclists,” said Transportation Minister Del Duca in an e-mail statement.

The survival rate for pedestrians struck by vehicles going 80 km/h is zero.

“The province wants input from the public, municipalities and stakeholders on whether to consider changing the default speed limit for local roads. Any decisions made always take the safety of our roads and road users into consideration,” Del Duca said.

One of the communities that was affected by careless driving is Leaside, a neighbourhood east of downtown Toronto, when seven-year-old Georgia Walsh was struck and killed by a minivan last July.

The driver had failed to stop at a red light and was charged with careless driving.

Since the accident, the community had put signs up around the area with the words, ‘SLOW DOWN’ as part of the a campaign by Kids At Play.

The Leaside Property Owners’ Association (LPOA) has been advocating for lower speeds in the area.

Traffic has been increasing over the years and even more with the added construction of the LRT on Eglinton, said LPOA Co-chair Carol Burton Fripp.

She also said that speeding has always been an issue in the area, but to lower the speed limit also requires proper enforcement.

The committee is working with Leaside councillor Jon Burnside, traffic committees and consultants in hopes to achieve “real results”,  she said.

She said one of the factors that also may affect drivers’ visibility while driving is tinted windows.

In Ontario, there is no percentage limit on how much a driver can tint their window, as it is up to police to determine if a car window is too dark.