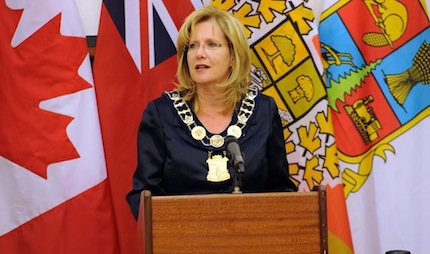 Brampton City Council decided Wednesday to separate the church and state, removing the Lord’s Prayer  from the commencement of all council meetings.

Brampton Mayor Linda Jeffrey interviewed all members of the council individually to come up with her decision to eliminate the 130-year tradition, which has been receiving mixed reviews from Brampton residents and council members.

“It’s a reminder to the council that we should continue to do what’s right for everyone,” said Regional Councillor Gael Miles. “(The Lord’s Prayer) is just a sense of good, and a reminder that we’re there to serve others.”

Miles said she would prefer the Lord’s Prayer at the beginning of the meetings, though she would not be opposed to a moment of silence for council members and the audience to reflect upon their own beliefs.

“A moment of reflection rather than any kind of prayer. The one that we have at the region of Peel is more of a pledge, it’s put in the form of a prayer and reminds us to not be parochial and to respect the differences of the three municipalities that make up the region of Peel,” said Elaine Moore, Regional Councillor and former school board trustee.

The Ontario Court of Appeal established a law that reciting the Lord’s Prayer in council meetings was to come to an end in 1999, which is nearly 16 years ago. Brampton is merely catching up.