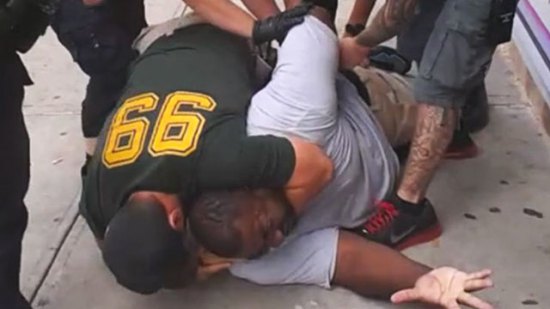 Protestors against racial profiling and police violence have taken to the streets across different U.S. cities the past couple nights after a New York City grand jury announced Wednesday they were not indicting NYPD officer Daniel Pantaleo in the July choking death of Eric Garner.

The jury cited not having enough evidence as the rationale for the decision.

This announcement comes just more than a week after a St. Louis County grand jury decided not to indict Officer Darren Wilson in the shooting of 18-year-old Michael Brown in Ferguson, MO.

While in the case of Brown there were a variety of witness reports citing different information, the killing of Garner was caught on a cellphone video, leading many to question the grand jury ruling that there wasn’t enough evidence to indict Pantaleo.

Lena Peters, an organizer for Black Lives Matter Toronto, told Humber News she thinks even if there is video evidence, the  U.S. justice system seems to favour the police, in cases where victims are of minority races. She believes this may be a reason why Pantaleo’s case was dropped.

“I think the Eric Garner case shows us that being able to see police brutality does not mean we will see justice afterwards,” said Peters.

“We can clearly say it is here on camera so there’s a clear unwillingness to address police brutality and police behavior in the U.S.”

Rosemary Sadlier, the president of the Ontario Black History Society said,  the grand jury ruling in favour of Pantaleo, contributes to the negative mistrust already established by the American people towards their country’s justice system.

“The fact that Black individuals are arrested more often and are more represented in the prison system than any other group does lead to many questions. In the case of Garner, that the video evidence was not even included, leaves one wondering how the judicial process is really being followed for every member of society,” said Sadlier.

In response to Wednesday’s announcement, NYC Mayor Bill de Blasio said the NYPD would be retraining their officers stating the current system of policing needs change.

Arielle Sugarman, a George Brown College student in Toronto, said she hopes this retraining goes beyond the NYPD, to other police departments to address discrimination towards certain groups of people.

“We have to retrain and relook at not just the way the police view certain people, such as those with mental health or those of minority races, but how society views these groups as a whole,” said Sugarman.

Protests are likely to continue across the U.S. in many cities, and Peters said Black Lives Matter Toronto is planning some type of action, similar to last week’s Ferguson rally.

At press time, she could not tell Humber News exactly what that action would be.