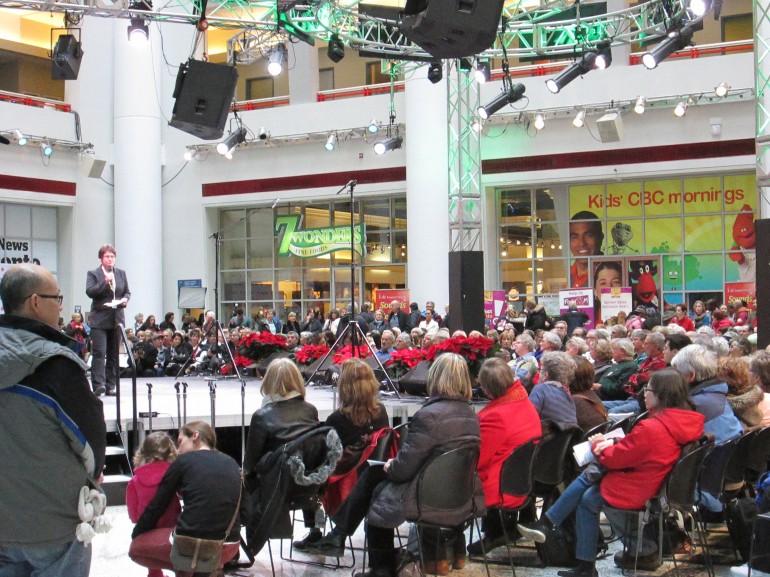 Wexford Gleeks get ready to perform at Glen Gould Studio

Every year CBC’s holiday event Sounds of the Season teams up with Daily Bread Food Bank to give back.

The event features performances by some of Canada’s greatest acts and it runs all day long.

CBC radio shows like Metro Morning, Fresh Air and Here and Now are broadcast live from Glen Gould Studio to an audience.

Everyone who comes is asked to donate or bring some canned food for the Daily Bread Food Bank. Audience members have a chance to meet some of the CBC personalities in the atrium and to watch the radio shows live.

Canadian singer and songwriter Luke McMaster participated for the first time at Sounds of the Season this year. He says he was happy to be a part of something so important.

“This event supports a really good cause. I think so many of us are very lucky especially at this time of year, ” McMaster said. “When we are together going on vacations, sharing with each other, having big dinners together and celebrating it is even more important to give back.”

“CBC has been holding drives across the country for years now,” she said. “It is important as a national broadcaster to give back to the community we live in.”

Sounds of the Season has had some great Canadian talent over the years. Musicians like Nelly Furtado , Shakura S’aida and special appearances from people like Chris Hadfield have helped to popularize the event.

By Friday evening over $320,000 was raised for the Daily Bread Food Bank.