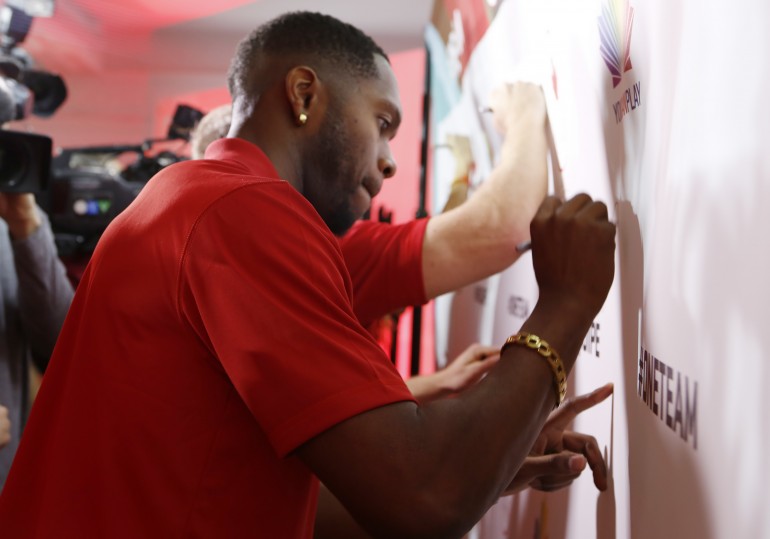 Olympians with representatives from the Canadian Olympic Committee, You Can Play, Egale and guests at the #OurTeam announcement (CANADIAN OLYMPIC COMMITTEE).

The Canadian Olympic Committee has announced a new partnership with LGBTQ organizations You Can Play and Egale Canada to help make the sporting community more inclusive.

The #OneTeam program will travel to schools where athlete ambassadors will talk about mental health, self-esteem and equality. LGBTQ-focused resources will be added to the Canadian Olympic School Program for students in Grades 6 to 8. The COC will also change the language in its by-laws and add training to create a inclusive culture for staff.

“Today is a positive step forward, and just a beginning,” said COC President Marcel Abdut in a news release. “Our hope is that this conversation leads to a safer, more diverse and inclusive sport system for our athletes, coaches, sport partners and our great country.”

In the next year the COC aims to create a more open conversation around LGBTQ issues including engagement with athletes, coaches and the rest of the sporting community.

Egale and the committee have already started training staff at offices in Toronto and Montreal. Current and former athletes are excited about the program.

“Sport is one of the great equalizers in our society, and every person deserves to be included regardless of the level of competition,” gold medal swimmer Mark Tewksbury, who came out in December 1998, said in a release. “The leadership being shown by the COC and Canadian athletes is a great step to ensuring inclusion and equality in sport and education is promoted across our country.”

Proud to be a part of the #oneteam ambassador program. Supporting equality in sport with @CDNOlympicTeam @YouCanPlayTeam @egalecanada — Jason Burnett (@JasonBurnett_) December 2, 2014

“We have possibility models, kids across Canada will grow up knowing that their lives matter.” @Wade_Davis28 #OneTeam pic.twitter.com/VK0LBCa5ao — Matthew Cutler (@matthewcutler) December 2, 2014

It is because of initiatives and people like @YouCanPlayTeam and @BurkieYCP that my teammates could be themselves. #oneteam #youcanplay