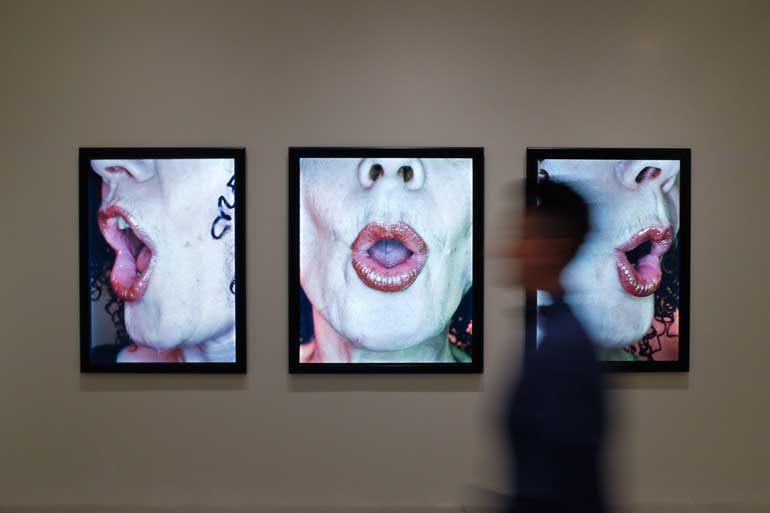 Thousands came out to the Art Gallery of Ontario’s First Thursdays event for November.

The AGO’s new multimedia exhibition showcases the work of Suzy Lake and follows the “groundbreaking, pioneering nature of her work” over five decades.

“This is an amazing Canadian artist that perhaps isn’t as well known as she should be,” said Shiralee Hudson, the interpretive planner for the exhibition, Introducing Suzy Lake, which opened Wednesday. “We should be heralding [Lake] from the rooftops.”

The AGO literally is, as the exhibit is set up in the contemporary tower section of the gallery.

Both curators spoke at the First Thursdays event, emphasizing Lake’s geographical movement from Detroit to Montreal to Toronto, where she witnessed civil rights movements (in late 1960s Detroit) and major artist-led cultural booms (in 1970s Montreal) until she moved to Toronto in 1978.

Suzy Lake as “Suzy Spice” speaks about her process in creating “Are You Talking to Me?” seen in part behind her. Photo by Nick Lachance

Lake appeared at the event dressed as her alter ego “Suzy Spice” to talk about her photographic installation Are You Talking to Me? while surrounded by the installation itself.

“I hope you feel the sense of the conversation closing in on you,” she said to the hundred or so listeners.

Another performance special to the First Thursdays event featured Toronto choreographer Amelia Ehrhardt in an intense  live performance. “Choreographed Puppet” was a recreation of a performance Lake put on in the 70s.

Introducing Suzy Lake will be exhibited until March 22, 2015.