Stars re-create Band Aid hit for a great cause 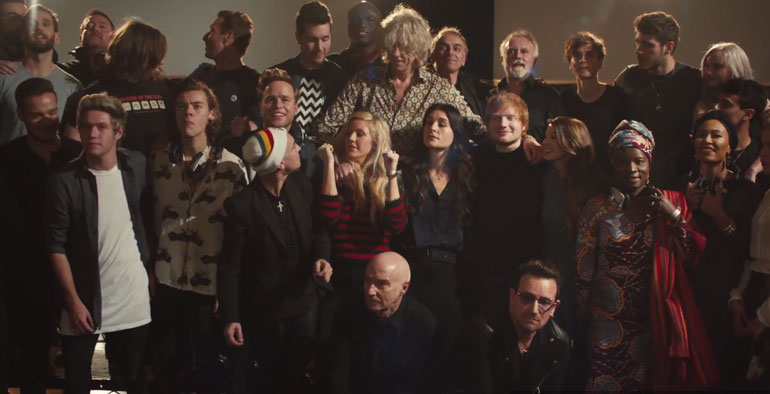 Band Aid 30 features a range of 28 new and renowned artists from all over the world.

“Do they know it’s Christmas time at all?”

Famous artists such as Rita Ora, One Direction, Bono and Chris Martin teamed up to re-create the 1984 Christmas Hit “Do They Know?” with ‘Band Aid 30’.

The non-profit project was released in effort to support Ebola relief in West Africa and all proceeds will be going to the cause.

According to the video, everyone involved in the video including artists, video editors and composers dedicated their services for free in order “to be a part of history”. The track was also recorded and made within 36 hours.

Pre-order sales were at $2 million prior to the release. Although the song was just released this morning, The $1.29 hit has already topped the iTunes singles chart. It has also shot to second on Amazon’s list of most purchased singles.

The original single was released in 1984 by UK charity group Band Aid. The group was founded by Bob Geldof and Midge Ure to raise money to combat famine in Africa. The single sold 3.7 million copies and is still a renowned Christmas hit today.

30 years and $230 million later, they hope to regain the same recognition with Band Aid 30.

The lyrics were even tailored to relate to the 2014 Ebola epidemic. Words like “Where the only water flowing is the bitter sting of tears”, is now “Where a kiss of love can kill you and there’s death in every tear.”

Co-Founder of Bandaid and Organizer for this year’s single, Bob Geldof, said in a BBC interview that demand for the single has been ‘vast’.

“I love living in this country at moments like this,” said Geldof. Geldof also went on to say that the UK “led the world” in this form of charity campaigning.

Meet The Stars of Band Aid 30

Artists posing together in a UK studio for the 2014 remake “Do They Know?”

In order of appearance…

Ever since its release today, #Bandaid30 has been trending worldwide.

Band Aid Single To Raise Fraction Of Wealth Of Those Singing On It http://t.co/qA7kypbR90 #BandAid30 #news pic.twitter.com/ocpJMwbauY

It’s only £5, but if we all put out hands in our pockets it could make a hell of a difference. #BandAid30 #EndEbola pic.twitter.com/UGe5KtNvGS