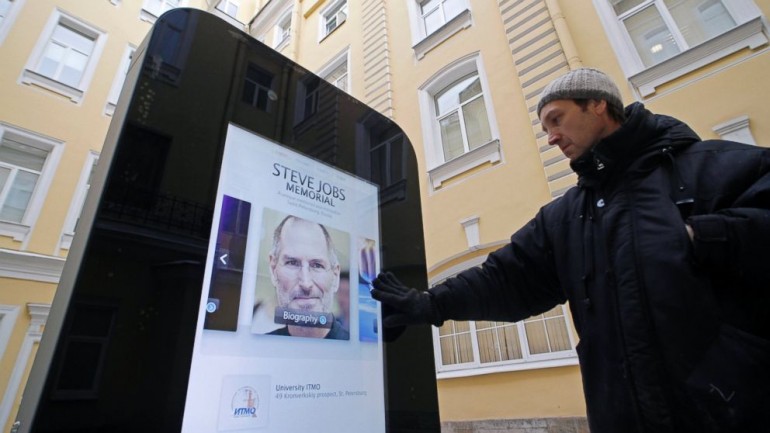 A memorial for Apple Inc. co-founder Steve Jobs has been dismantled in the Russian city of St. Petersburg after the company’s CEO Tim Cook announced he was gay.

The two-metre high statue in the shape of an iPhone was constructed outside of ITMO University in January 2013 by a Russian group of companies called ZEFS.

The reversal came about when Cook publicly announced last week he was gay and that he was proud of it.

In 2013, Russian President Vladimir Putin passed legislation that prohibited the distribution of what he says is “gay propaganda” among children.

Although Steve Jobs was not a homosexual, ZEFS say they do not want to associate themselves with anyone whom promotes non-traditional family values.

The monument was installed a year after Jobs died and was built as a sign of respect for the late inventor.

After Cook’s revelation on Thursday, St. Petersburg lawmaker Vitaly Milonov called for Cook to be banned from traveling to Russia.

Milonov said in a statement that Cook could bring “the Ebola virus, AIDS, gonorrhea” to Russia and that they should “ban him for life.”

ZEFS founder, Maxim Dolgopolov, ordered the removal of the monument and expressed his reasons for doing so.

“Sin should not become the norm,” said Dolgopolov. “There is nothing to do in Russia for who intend to violate our laws.”

Although Russian authorities believe they are doing the right thing for their country, social media contributors have been very vocal about their thoughts on the situation thus far.

Tim Cook and Apple Inc. have yet to respond to the removal of the statute.