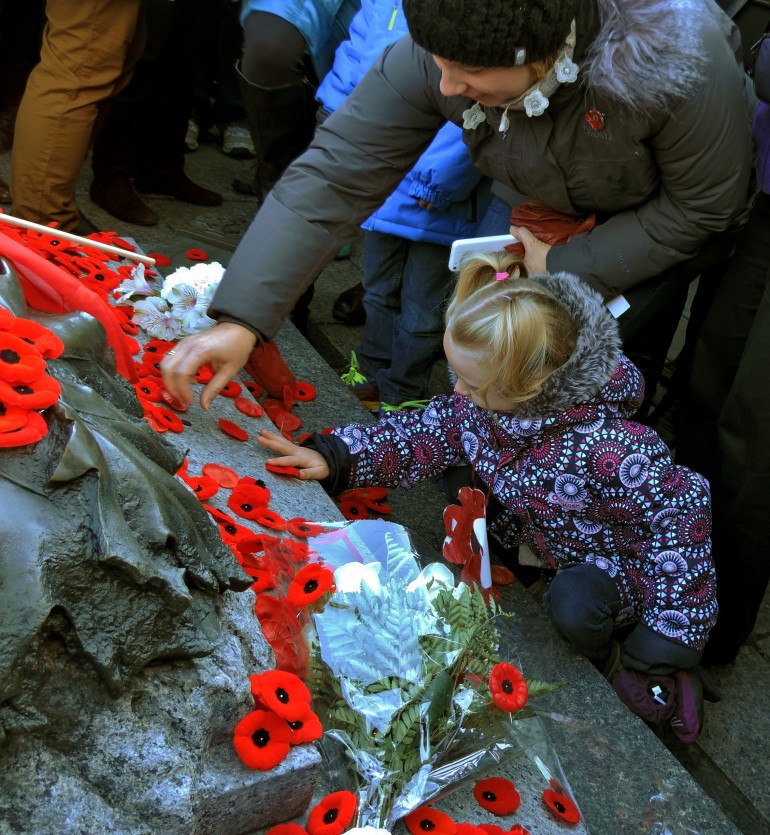 Tens of thousands of Canadians paid tribute to fallen soldiers and veterans at the National war Memorial ceremony in Ottawa on Tuesday.

Several blocks were blocked off around the War Memorial for Remembrance Day ceremonies on Parliament Hill. People had began lining the streets as early as 8:30 a.m.

Police presence was very heavy for a several block radius around Parliament Hill.

All flags on and around Parliament Hill have been lowered to half-mast since the death of Cpl. Nathan Cirillo, who was gunned down at the National War Memorial in Ottawa almost a month ago.

A tribute for Cpl. Nathan Cirillo on a wreath at the base of the National War Memorial.

Officer Kennedy, a media spokesman with Ottawa Police, said, “there is is an increased police presence here today. We’re not taking any chances.” Many officers were armed with C8-Carbines, standard issue battle/patrol rifles.

David Stiles and John O’Brien are both war veterans who agree that this year’s Remembrance day ceremony is a little different because of the shooting. Both veterans marched in the parade.

Many people bowed their heads for a two-minute moment of silence, while others cried quietly in the crowd. Prime Minster Stephen Harper, his wife Laureen Harper, Justin Trudeau, Princess Anne and Minister of Veterans Affairs Julian Fantino attended the Remembrance Day ceremony at the National War Memorial in Ottawa.

Officer I. Matyaas stood at the base of the memorial over looking the hundreds of people who  gathered around to pay their respects to all the fallen soldiers.

The memorial opened to the public after the ceremony. Hundreds of people laid  poppies, flowers and cards on the tomb.

A 21 gun salute rang out throughout the ceremonies.

People with children and pets came to walk and play on the grass on Parliament Hill, still making it the people’s building.