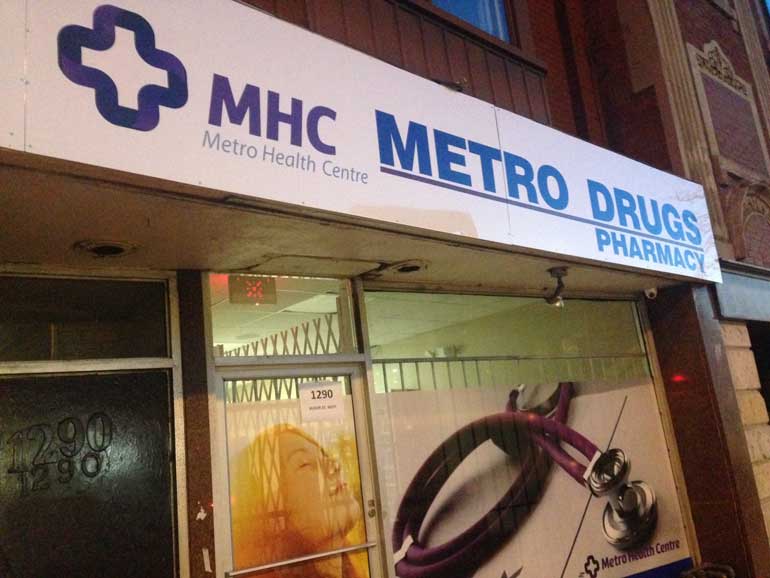 Residents of the Bloordale community on Toronto’s west end are upset because Metro Drugs, a family clinic which opened on Monday, distributes methadone to recovering drug addicts.

A community meeting was held Thursday night where community members could air their concerns to MPP Cristina Martins, City Councilor Ana Bailao and to the doctors and pharmacists who operate the clinic.

“We’ve been through a lot of problems in this neighborhood with drugs. It took us a long time – 25 years – to get rid of it, and you’re bringing it back,” said one upset resident.

Also at the meeting were representatives from the Centre for Addiction and Mental Health (CAMH) and the Toronto Police Service.

Martins emphasized that the purpose of the meeting was to help “de-stigmatize” methadone maintenance treatment and to educate the neighborhood on the benefits this clinic will have on the up-and-coming neighborhood.

The most common complaint was that a methadone maintenance treatment clinic on Bloor Street near Lansdowne subway station will bring drug addicts and drug related crime to the neighborhood.

“I often come home late at night from (Lansdowne Station). That area has always been a hot spot. I’ve been a victim of a lot of petty crime and I am deeply concerned,” said another citizen.

Dr. Eric Solway was quick to tell people that their concerns are unwarranted.

“The truth is, people with substance abuse issues are less likely to be involved in crime if they’re receiving treatment,” Solway said.

The doctors also assured residents that the clinic is only open during regular business hours and that security cameras have been installed on the inside and outside of the clinic.

Councilor Ana Bailao acknowledged that the Bloordale neighborhood has done a lot to combat crime and drug abuse in the neighborhood, but that all their actions to date have ignored “the root of the problem” and only served to displace addicts and dealers to other neighborhoods.

Metro Drugs has been in business for 20 years. It originally opened in Parkdale but, for the past 10 years the clinic has operated near Bloor and Dundas West, only one subway stop away.

The doctors at Metro Drugs are also family doctors and pharmacist and the majority of their clientele are not recovering addicts.

Many of the community members were also frustrated that the clinic was able to open its doors without any consultation from the community, the BIA or the local or provincial government.

“We’re not all necessarily here saying ‘this is a terrible thing.’ If you’re serving someone with a serious problem, that’s admirable, but I just wish we knew a little sooner and we had this talk about a month ago,” said one man to applause from many.

The area of is zoned for a family clinic, so no consultation on the part of the doctors was necessary.

The doctors said they were surprised at the amount of outcry from residents as they operated for a decade just one city block away with no complaints.

“It came as a great surprise to us to hear all this interest and concern when we announced we were moving to just a few blocks away,” said Solway.

The clinic moved because its previous landlord was unable to offer a long-term lease, but they wanted to remain in the area and near to a subway station.

Methadone maintenance treatment (MMT) is a common treatment for people who suffer from opioid addiction to things like heroin but also prescription drugs such as codeine, morphine and oxycodone, according to CAMH.

About 20 per cent of Toronto adults use prescription opiods, and there has been a dramatic increase in prescribing opioids by doctors in recent years.

Non-medical use of prescription opiods among Toronto adults has increased to appoximately four per cent of the population in 2012 from around two per cent in 2009.

Dr. Irwin Asbell said  the perception of methadone users by members of the community was misguided.

“We treat doctors, lawyers, dentists, professional athletes, businessmen, teachers, injured firemen, plumbers, housewives who’ve never used drugs and got into a motor vehicle accident and end up addicted to painkillers, and many others,” he said.

Not everybody in attendance at the community meeting was upset.

Many came out in support of the clinic and at the close of the evening, people lined up to shake hands with the doctors and welcome them to the neighborhood.