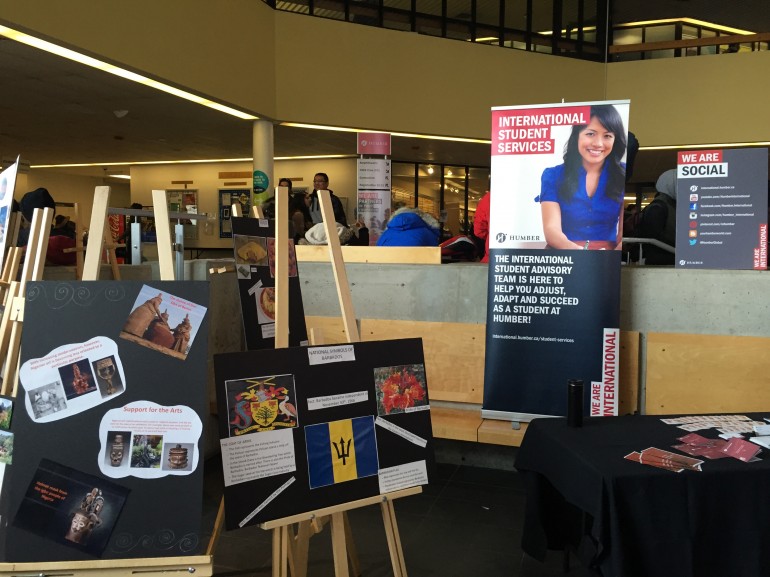 Foreign students are in the spotlight as schools across Canada celebrate International Education Week.

Here at Humber the International Centre has hosted a series of events including language cafés and a photo exhibit.

The flagship event, Humber Goes Global, was held Wednesday at North Campus and Thursday at Lakeshore. The International Centre described it as an interactive global fair.

Volunteers and student ambassadors from the international centre were given the reigns to decide how to best represent their own country at the event. The Italian booth served espresso and tiramisu while steel drummers played to bring the sound of Barbados to Humber.

A steel drummer performed as a part of the Bahamian exhibit.

“We get to bring domestic and international students together because most of the time we’re so separated,” she said.

Gabriella said that she hopes events like this one will lead to international and domestic students meeting and talking.

“Sometimes as an international student it’s difficult to make friends in a new country,” she said. “This is a good way to get everyone together.”

Gabriella ran a Spanish language café earlier in the week that taught basic Spanish through games and offered Canadian students a taste of Mexican food.

There have also been Vietnamese and Hindi language cafés this week.

McDonald said these get-togethers are a way native speakers can share their pride of their home and culture.

“They are an opportunity to ask questions and open the lines of inquiry across cultures,” he said.

McDonald said the Internationalization Strategy is about all of Humber’s community.

“It’s not simply about the growth of an international student population,” he said. “It’s also about increased study abroad opportunities and international global perspectives inside the classroom that are built in as part of the everyday Humber experience.”

McDonald said a global perspective is a crucial part of being a 21st Century member of society and being employable in an increasingly globalized world.

A successful International Education Week would see the involvement of all of Humber’s community, he said.

“It’s a great learning opportunity to see how other people have different perspectives on the world and how people’s backgrounds shape their understanding of the world,” said McDonald.

“To see that at the same time we all share a fundamental humanity. Despite all this diversity we are all one people.”

One activity at the Japan workshop was Japanese calligraphy.