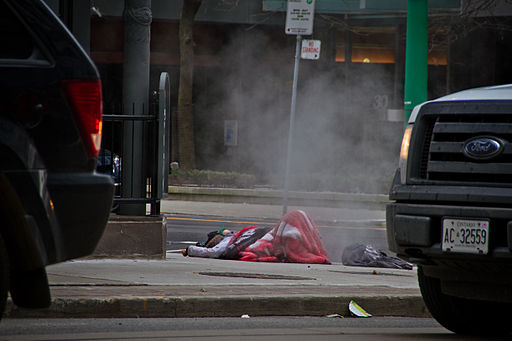 The severity of homelessness laws in U.S. cities is being brought to the forefront following the arrest of a 90 year-old man who organized an event to feed the homeless in a Florida city park.

Arnold Abbott, founder of the charity Love Thy Neighbor, that combats issues surrounding homelessness in his native Fort Lauderdale, is charged under a new law in the Florida city that forbids feeding homeless individuals in public.

It’s nothing new for Abbott. In 1999, he sued the city when it tried to block him from feeding the homeless on Fort Lauderdale Beach and won.

Fort Lauderdale is now one of more than 10 cities that have implemented policies restricting sharing food with homeless individuals.

Penalties vary for breaking these laws, but in the case of Abbott, he could face up to 60 days in jail and a fine of $500.

In Toronto, Holly Thompson, director of public relations for The Scott Mission, an organization dedicated to providing food services for the homeless, said Fort Lauderdale doesn’t know how to combat homelessness if they’re passing these new laws targeting this population.

“Fort Lauderdale has a number of homeless people and they don’t seem to have enough services that can deal with this part of the population,” she said.

“Laws such as the one passed might be a thing of their culture, but they need a more structured public policy on how to deal with the homeless,” said Thompson.

Feeding the homeless on public property is also being done in Toronto through an organization called Street Patrol.

Lucio Abbruzzese, organizer of the initiative, has been putting together groups to give out sandwiches to the city’s homeless for nearly 20 years.

He said the U.S. shouldn’t be dealing with their less fortunate populations in the way that they are.

“The whole thing is disgusting. I feel as if they’re treating homeless people like animals, being round up like stray dogs in some cases and taken away from the public eye,” said Abbruzzese.

In recent years, the severity of laws in U.S. cities against homelessness has increased dramatically.

A 2014 study by the National Law Center on Homelessness & Poverty surveying American municipal laws against homelessness found restrictions against this group to be bigger than ever.

Thirty-four per cent of cities created bans on camping in public places such as parks, cars on public property and more.

One hundred cities have banned sitting or lying down in public places.

In all the U.S. cities surveyed, according to the study, there has been a 43% increase of the passing of this law in the last three years.

In Toronto and other Canadian cities, laws targeting homelessness are much less harsh than our U.S. counterparts.

It Is Illegal For Homeless People To Sit On Sidewalks In More Than Half Of U.S. Cities http://t.co/K7PMXxbjIY pic.twitter.com/HURcHDDSF0

Thompson said in Toronto there’s plenty of services that are easily accessible for the city’s homeless.

“Any person can call 3-1-1 if they need to find a shelter and we have many food services that work constantly to make sure people don’t go hungry.”

Also, according to Abbruzzese, there’s much less harassment towards those like himself who are trying to help the homeless.

“In my years of running Street Patrol, my groups and I have only been harassed by private security who said we can’t be loitering in certain property. Aside from that we’ve been able to do what we set out to do with little to no problems.”

The Streets Use By-Law passed in 2012 by the City of Toronto doesn’t restrict homeless individuals from sleeping or resting in public places, with TTC and street boundaries surrounding private property being an exception.