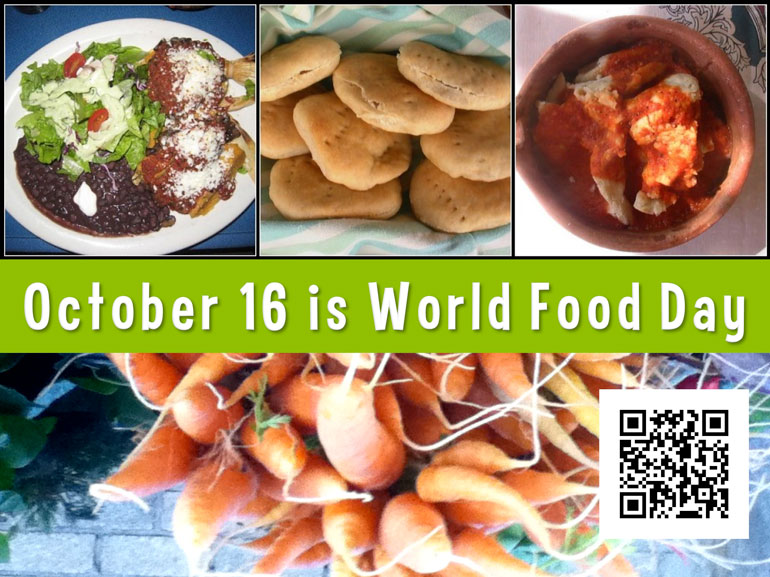 People gathered in many countries around the world Thursday to draw attention to the growing global food crisis.

World Food Day is designed to get people to give real thought to global hunger and consider meaningful ways in which they can help.

It is in that spirit that co-founder and Chief Marketing Officer of the Aspire Food Group, Shobhita Soor stood before guests at a World Food Day Event in Ottawa on Thursday and presented the global hunger-alleviating values of entomophagy.

That’s also known as the human consumption of insects as food.

No she wasn’t talking about turning into the kid at the back of class picking a light snack up off the floor, but maybe that kid was ahead of his time.

Watch the entire video of Soor’s remarks below.

The 2014 Global Hunger Index shows hunger levels in developing countries as having fallen on average by about 39 per cent since 1990.

Despite the numerous achievements in food security over the past 14 years that helped reaching those figures, the GHI still classifies the level of global hunger as “serious”.

The 2014 GHI found, based on figures from the UN and the Food and Agriculture Organization, 805 million people in the world continue to go hungry.

The report also found around 2 billion people suffer from malnourishment as they do not get the necessary vitamins and minerals from the food they consume, what the GHI calls a “hidden hunger”.

Soor’s remarks to the audience began by questioning why the private sector should play a role in food security.

She said that because the private sector operates in an inherently competitive environment it is also constrained in certain ways by that competition.

“So that pressure that it operates under gives rise to some unique abilities,” she said.

Soor said the private sector has access to the necessary resources and incentives to innovate and invest in new technologies creating new economies of scale and lowering global food prices.

It was the desires of the private sector for efficiency and stability that lead to the commercial seed, she said.

Soor further argued the common fear among many about the nature and desires of business has dissipated of late following the rise of numerous successful public-private-partnerships.

That said, the threat these partnerships may pose a negative impact does still exist.

Soor said this threat is often born from exactly what she felt offered business the ability to play such an important role in any response to the the global food crisis: competition.

She argued the proof was the irony in the nature of the problem itself. Eighty per cent of the world’s hungry are food producers themselves.

Soor said that when any private company, whether large, medium or small, moves into a developing country and attempts to use its resources to help, it effectively ends up competing with these local farmers.

This is why Soor said one of the main goals in food production for the future should be efficient not just in cost and time to grow but also nutritional efficiency. She said the price must also ensure it remains widely accessible.

Entomophagy is a term used to refer to the human consumption of edible bugs.

Soor said increasing population, income, meat consumption and other factors will all lead global demand for protein to double by 2050.

“So how do we feed the world enough protein over the next couple decades is a very important question when we’re operating in a world that is shrinking in terms of resources…but is increasing in terms of population,” said Soor.

Soor said insect protein is among the most efficient in the world.

“Gram for gram…it takes drastically less land, less water and less feed to produce,” she said. “And it’s locally palatable so going into different areas around the world, there are different insects that are native to that region, that are desired, that are delicious, that people really enjoy.”

But there are some problems with entomophagy.

Most insect consumption is done through a simple harvest and eat process. Soor said this has cause the sector to gain attention as one that could become considerably more profitable with the discovery of new farming methods.

“If we can farm it we can definitely bring down the price,” she said.