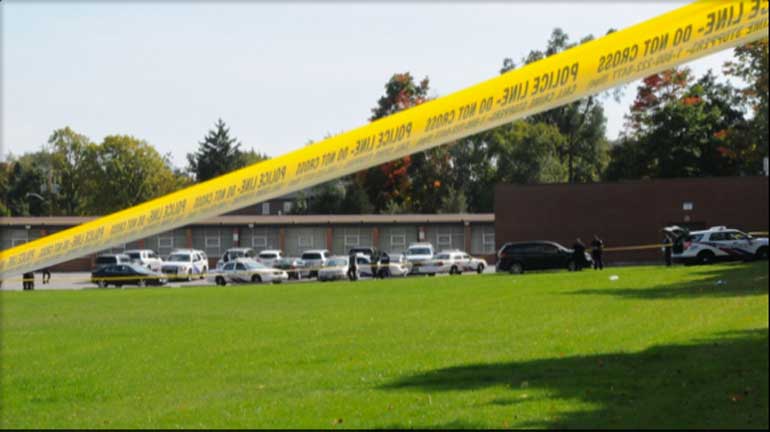 By Kathleen Jolly and Kendra Hamilton

Two people are dead after a double shooting near Don Bosco Catholic Secondary School. Police say a suspect is in custody and police are searching for at least three others.

One male victim in his late teens or early 20s was pronounced dead at the scene, another was rushed to Sunnybrooke hospital in critical condition, where he succumbed to his injuries.

“This is very early on in the investigating there’s lots of work for us to do. We have lots of forensics to carry on and interview witnesses,” he said.  “And we want to find out if those suspects are still in the area, they’re armed and obviously very dangerous.”

Taverner said it wasn’t clear whether the shooting had any connection to Don Bosco.

However a witness said he saw a group of about 40 young people come from the Don Bosco parking lot and run behind the apartment building where moments later shots rang out.

He said the group of people was likely made up of students because they were in uniform.

“It’s hard not to tell Don Bosco, gives it away, green and black,” said Michael Snary, who was walking his dog at the time.

“They were yelling at each other and swearing, I thought there was going to be a fight,” said Snary.

He said a woman who he believes to be a teacher followed the group that came from the Don Bosco parking lot.

“She was telling the students to go back to the school and that’s when the gunshots rang ,” said Snary.

“I heard the three shots,” he said. “It was bang, bang, bang. And then one kid he ran across and dropped.”

The shooting occurred at around 12:30 p.m. near The School of Experiential Learning. Police are yet to give out the exact location.

Police said multiple schools in the area went on lockdown while they investigated.

“Certainly a very devastating thing to have happen here in the middle of the afternoon very close to two schools, quite frankly,” said Taverner

A grade 12 Don Bosco student coming out of lockdown said students inside weren’t aware of what had happened outside.

“They told us to get in the class. Put in all the students and that’s it. Told us to get down, there was trouble outside and that was all,” he said.