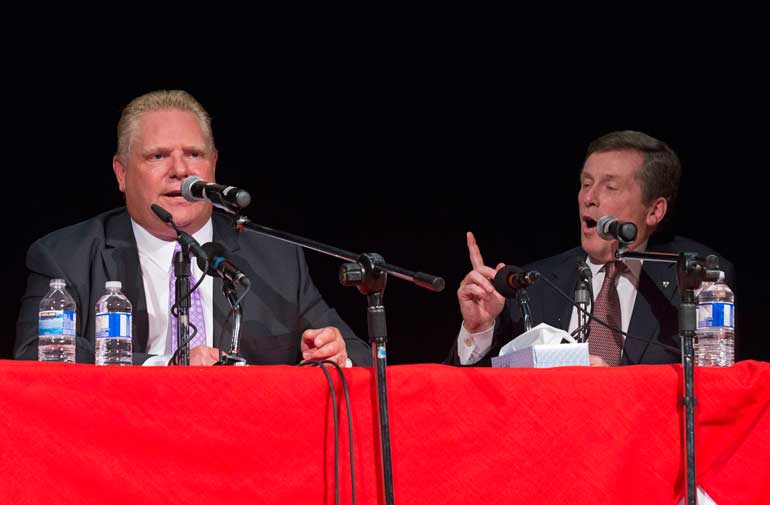 Since the doors closed on new candidates in Toronto’s mayoral race Sept. 12, Mainstreet Technologies and Forum Research are the only pollsters to release multiple surveys.

John Tory leading the race with Doug Ford second and Olivia Chow third is the only thing upon which they seem to agree.

This week, in polls performed a day apart, Forum gave Ford 37 per cent support on Oct. 6 while Mainstreet found on Oct. 5 26 per cent would vote in his favour.

A week ago the disagreement on Ford was even larger (Forum 33, Mainstreet 21) with a large margin separating Chow’s numbers as well (Forum 20, Mainstreet 30).

Both pollsters are using interactive voice response (IVR), a method by which an automated system reads questions to the respondents before listening for and categorizing their responses.

David Valentin, Mainstreet’s media relations guru, said the pollster has a policy not to comment on anyone else’s numbers. There was one thing he said that sets Mainstreet apart from all others.

“One of the main differences between what we do and what others do is that we really believe in a large sample size,” Valentin said.

That belief is carried out in the numbers. Their sample sizes have been outmatching those of Forum by a factor of more than two to one.

As a result, their margin of error — a measure of the accuracy of a survey’s data — is 30 per cent smaller than Forum’s.

Neither pollsters’ margin of error accounts for the massive difference between their numbers, however, adding to the growing mistrust in political polling. In three recent provincial campaigns, the polls’ predictions were all wrong.

Alberta’s 2012 general election was expected to be tight resulting in a Wildrose minority victory. It ended with a massive Progressive Conservative majority. The PCs popular vote came in eight points higher than the closest pollster’s prediction.

Fast-forward to British Columbia 2013. The New Democratic Party held a large lead in nearly every poll throughout the campaign yet Christy Clark and the B.C Liberals hold more seats now than they did before they dropped the writ.

It happened again here in Ontario earlier this year, although to a lesser extent. Pollsters were expecting a Liberal victory, albeit a tight minority. Now we’re setting out on four years of majority Liberal rule.

What does this all mean for Torontonians Oct. 27? Valentin said they stand behind their numbers “20 times out of 20” but they could still be wrong. “We’ll see on election day (who’s right).”

Calls to Forum Research for comment were not returned.

Lorne Bozinoff, president of Forum Research, told Humber News that varying margins of error, a time delay between polls and even variations in survey questions could influence and cause discrepancies in results.