The state of Ebola: not just Africa’s problem 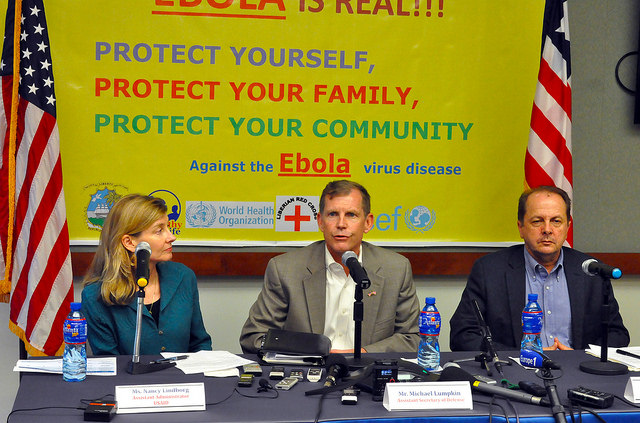 Doctors at the Texas Health Presbyterian Hospital in Dallas confirmed the first human case of the deadly Ebola virus in North America on Wednesday.

On Thursday a Toronto patient was quarantined at a University Health Network center. The patient was admitted with flu like symptoms. They recently returned from Nigeria, which is listed as a West African Ebola outbreak country.

The Director of Infection Prevention and Control at the UHN, Dr. Michael Gardam, said it is “exceedingly unlikely” the patient has Ebola but precautionary measures were taken. There hasn’t been a case of Ebola in Nigeria for three weeks.

On Tuesday Thomas Frieden, the Director for the Centers for Disease Control and Prevention, said he has no doubt the virus will be controlled.

“We’re stopping it in its tracks in this country,“ said Frieden.

However nurses feel unprepared and untrained to deal with Ebola patients, reported Julie Steenhuysen from Reuters on Friday.

“Another 30 per cent said their hospital has insufficient supplies of eye protection and fluid-resistant gowns,” reported Reuters.

“Points of entry into Canada are routinely monitored 24 hours a day, seven days a week through provisions of the quarantine act. There are no direct flights into Canada from the infected areas in Africa,” said Ambrose.

The Canadian Quarantine Act states any traveller who might have a communicable disease based on reasonable grounds may be isolated immediately and arrested without warrant if isolation is refused.

The Act’s purpose is “to protect public health by taking comprehensive measures to prevent the introduction and spread of communicable diseases.”

Ambrose said Canada is prepared to spring into action if Ebola does make it across the border.

“The Public Health Agency would immediately advise the public and ensure all appropriate precautions are taken to protect Canadians,” she said.

The patient in Dallas has now been confirmed as Thomas Eric Duncan who has been in isolation since he was tested on Sunday.

He was “not symptomatic and therefore not contagious during his travel to the United States,” said Taylor. “The Ebola virus does not spread easily from person to person like a cold or a flu. It spreads through direct contact with infected bodily fluids not through casual contact.”

Taylor reaffirmed that Canada is prepared for any communicable disease.

“Comprehensive procedures are in place at our borders to identify sick travelers arriving in Canada,” said Taylor.

Ebola Around the World | Create Infographics

In August a Brampton man was hospitalized following a trip to Nigeria but tested negative for Ebola and on Thursday there was another scare in Honolulu but Ebola was ruled out.

The Ebola virus has killed over 3,000 people in West Africa said the World Health Organization.

The WHO says over $1 billion is needed to fight the Ebola outbreak in Africa.

“Canadians can be very proud of the efforts we are doing to help fight this outbreak in West Africa,” said Ambrose.

She said Canada has contributed over $35 million to the WHO, Medecins Sans Frontieres and the Red Cross. A mobile laboratory with Canadian scientists and supplies has been in Sierra Leone since June and a donation of personal protective equipment has just been announced.

International contributions are essential to fighting the disease, but domestic readiness cannot take a backseat. Ebola in North America is an unsavoury, but confirmed, reality.